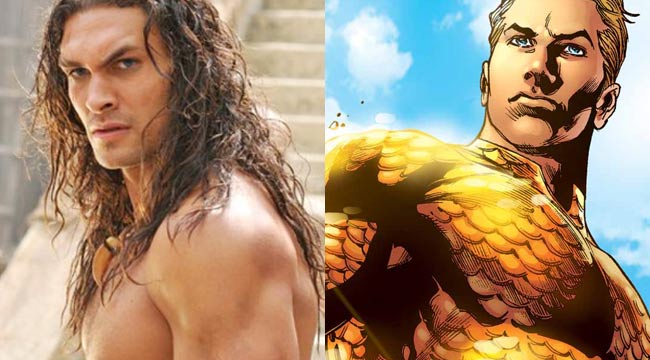 Momoa’s Aquaman to Have Surfer Look in “Dawn of Justice”

Would you believe us if we said that Aquaman had been introduced in a past film? Granted, it wasn’t Jason Momoa at the time, but there was a small hint at what he would look like in the future films. Aquaman was reportedly in Man of Steel just last year, at least he was off screen and we can prove it a couple of different ways.

According to Schmoes Know, “He’s going to look like a surfer essentially with tribal tattoos and all that jazz.” We do know that Jason Momoa is of Samoan descent and has a few tribal tattoos which could very easily carry over without makeup. They may add on to them if anything to enhance the cool surfer vibe.

Another rumor making the rounds is that Aquaman will want a piece of Superman when he makes a small appearance in Batman v Superman. In Man of Steel, the Indian Ocean is damaged by General Zod’s World Engine. The whales that were seen above Clark Kent as he fell into the ocean may be a sign that Aquaman is nearby and is not happy.

“Aquaman sent the whales to save Supes and make sure he was okay, which makes sense considering we never actually see how Supes gets back to shore in the film. He sees the whales and then it cuts to him walking on land, which could mean they were saving the swim back for Batman v Superman: Dawn of Justice.”

If this is the case, Superman and Aquaman have already met off screen and it also means there is room for another tie-in film. However, we are still not sure how the Aquaman movie will tie in with the rest of the DC universe as of yet.
[signoff2]