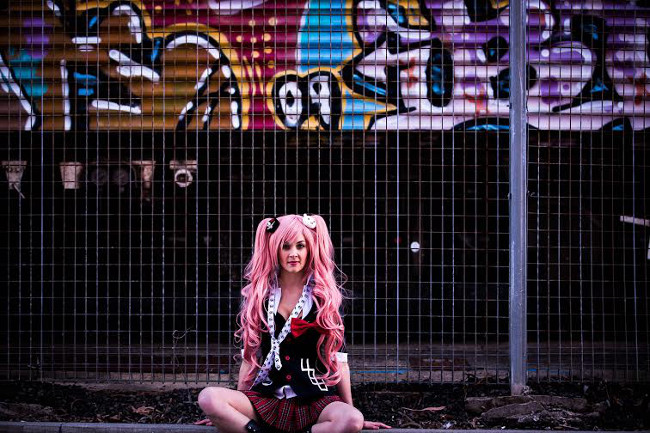 Junko Enoshima is one of the main antagonists in the handheld Japanese fighter game, Danganronpa: Trigger Happy Havoc and also bears the title Ultimate Fashionista. She is also the founder of Ultimate Despair and the younger twin sister of Mukuro Ikusaba. Depicted with a tall, feminine figure, Junko has deep blue eyes and long, thick, strawberry blonde hair tied in two pigtails, with Monokuma hair clips. Clad in a black cardigan over a loose white dress shirt exposing her lingerie, she also has many accessories, including a loose black-and-white tie and red bow. Junko is also known for wearing a red miniskirt and lace-up boots. She has long, fake red talons. Her appearance and personality will often shift in sync with one another, as they are interdependent. Junko had wanted to be a model ever since she was a child, but was also eager to try new things. She took her country by storm as a fashionista with extravagant tastes. Her personality and mannerisms tended to be extremely erratic and unstable by her own autonomous design and she states that keeping up one “appearance” for too long bores her. Cosplayer Amy Falkenmire has a legion of amazing cosplays such as her awesome Archbishop Ragnarok cosplay. She’s added this fantastic cosplay of Junko Enoshima to her collection of cosplays and it is epic!

This Elizabeth Cosplay Takes You to Another World