A Tolkein Smaug the Terrible Cosplay that is Pure Gold

The Breaker of Chains Daenerys Targaryen in Epic Cosplay 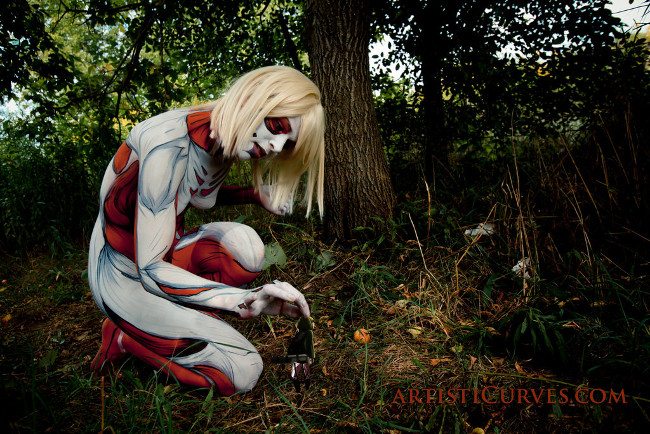 This Female Titan Cosplay is Larger Than Life

When Attack on Titan was released, many of us were excited to hear news of an amazing new anime that would soon be making its way to the states. While not everyone knew about the show ahead of time, it certainly did not take long at all for the word to spread about how epic the show was. For many of us, Attack on Titan was like a fresh breath of air on a breezy afternoon after being cooped for far too long in an old dusty house.  Finally! We could look forward to enjoying an anime series that wasn’t about awkward high school social clubs. Unlike most of the 2013 anime releases, Attack on Titan offered its fans a unique plot that was full of mysterious giants who seemed to enjoy snacking on humans for the fun of it. These giant humanoids were definitely not like any giants we had ever seen. They almost looked like giant toddlers, as they stomped their way through the inner city in search of their next tasty snack attack. Although there are still plenty of details that have yet to be discovered about the anatomy and existence of the titans, throughout the first season we discovered that the giants walked around naked with wide disturbing grins across their faces. Most of the titans looked pretty much the same— despite not showing any sign of a male reproductive system, the titans were clearly males. While most titans looked similar, there were a few that were different. These titans were unique in that they had several abnormalities such as exposed muscle due to limited or no skin coverage. They also appeared to be stronger and more physically fit in comparison to the relativity smaller and seaming less intelligent titans who had skin. Out of titans, one titan was especially different. Not only was this titan a colossal titan, it appeared to have a more feminine physic! Cosplayer shelle-chii knew as soon as she laid eyes on this titan that she had to bring her to life. There are two logical ways that one could cosplay a colossal titan. One way would be to wear a body suite that has muscles that look similar to that seen on a colossal titan. Of course, the muscles might not line up just right on the cosplayer, making them look strangely disproportionate. The other way would be to actually use body paint to follow the body’s natural curves. While walking around in just body paint might not be for everyone, it does take the cosplay to a whole new level as it allows an artist to add depth to the muscles and ligaments of the titan so that it looks more natural. Shelle-chii was brave enough to go the extra mile on her female titan by baring it all for the sake of cosplay. She worked with talented artist, photographer, and photo editor, oldmacman to completely embody the female titan’s form. By capturing her titan form from low angles, oldmacman was able to make Shelle-chii look as if she was towering over us. We love how Shelli-chii made sure to stay true to the posture and mannerisms of the female titan, even when she reenacts the running scenes from the show—her stance remains similar to the female titans’. We are certainly glad that Shelle-chii teamed up with oldmacman to create these totally epic prints that truly capture the essence of what it would be like to be a tiny human who is in the path of a colossal titan on a mission. World of Warcraft: This Queen Azshara Cosplay is Wicked

View more of Shelle’s cosplay work at her Facebook and DeviantArt pages.
Photography by oldmacman.