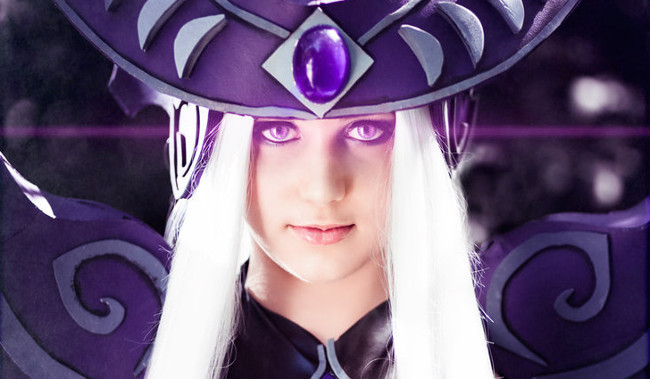 League of Legends’ Dark Sovereign is Unleashed in Stunning Cosplay Syndra, the powerful sphere wielding mage, is known for her massive burst ability. Born with a magic potential that increased rapidly and uncontrollably, the fearful elders of Syndra’s village sent her away to a temple to learn control. Still relishing in the growth of her magic, she noticed that it was not increasing as it once had. Confronting her teacher, she killed him when he confessed he had dampened her powers and threatened to nullify them completely unless she learned to control herself. Freed at last, Syndra vowed revenge on the Ionian leaders who had masterminded her imprisonment. Syndra’s sexy original skin has been donned by cosplayer Yarpenna to great success. With a fine attention to detail, Syndra’s outfit is magnificent. Most notable is the headpiece. Sitting gloriously atop her long white hair, it radiates with Syndra’s power. It is a focal point for Yarpenna’s images, and its execution is deserving of that. The details match the skin’s, with the purple orb in the middle gleaming sinisterly. The whole ensemble has clean lines and crisp colors. The editing on the photos enhances the feeling that she is overflowing with power and really compliments Yarpenna’s cosplay. The Beauty of Scarlet Witch Transposes to Incredible Cosplay