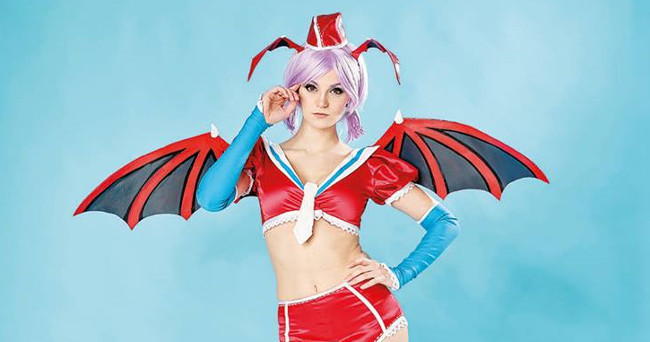 Lilith Cosplay has a Will of Her Own

Lilith first came into being as a piece of Morrigan’s soul that was sealed away. This part of soul became self-aware, gaining a will of its own. This will became Lilith. Gaining a body of her own, she modeled herself after Morrigan, though with a more childish appearance, due to looking up to Morrigan. First appearing in Darkstalkers 3/Vampire Savior in 1997, she is one of the game’s bosses that Morrigan has to defeat. Her childish demeanor has led her to be used by Jedah in his plan even though she believes it will help Morrigan. Based on the fan art created by NoFlutter, Haruhiism Cosplay creates a fantastic Pinup Lilith. Sticking with her original color palette, she is wearing a red two piece outfit with a nurses hat. The top is adorned with a white tie and ruffles. Matching ruffles adorn the bottoms. Red and black wings come out from her back as well as her head. Blue arm warmers and bat embellished leggings, with white boots complete the look.