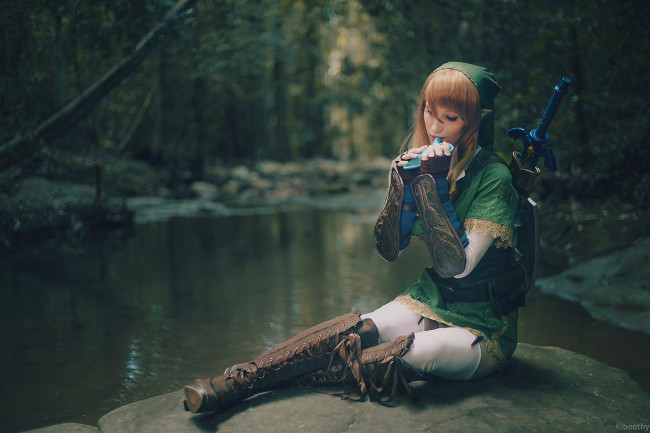 Link is the main protagonist throughout the Legend of Zelda series of games. First appearing in 1986 in The Legend of Zelda, his popularity skyrocketed. He runs around Hyrule, defending it from evil and rescuing Princess Zelda. Aided on his adventures by various companions, he battles his way to victory, often smashing pots along the way. Aging throughout the series, he starts off as a regular boy, giving players faith that they too can be heroes. While Link is often called Zelda, much to everyone’s dismay, cosplayer Talia Mira took that as inspiration for a female Link. Sticking with traditional design and characteristics of Link from Twilight Princess, Talia Mira is adorable as she travels in the Kokiri Forest. Instead of the green top being a top, she transforms it into a beautiful gold edged dress. The white pants are now white stockings, while the brown boots are fabulously heeled. Equipped with sword and shield and trusty cap on head, she wanders around the wilderness, taking a break in the Hyrule Fields. Photographer Beethy does a magnificent job at capturing the magical qualities of not only Talia Mira, but the setting as well, making the photos truly feel as if they are part of the game.