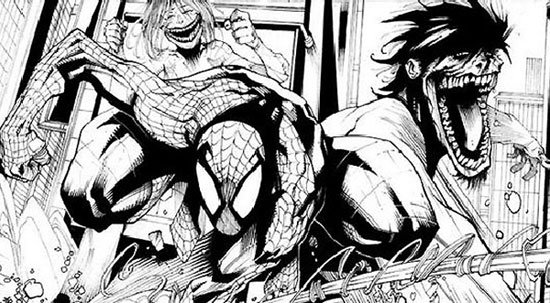 Marvel and Attack on Titan Crossover is Happening

This should be interesting. Marvel Senior VP C.B. Cebulski recently invoked a major “Oh Really?” from several realms of nerdom when he released this this curious tweet.

Not a joke, folks. Attack on Titan and the @Marvel universe are crossing over! In 2 weeks. In Japan. Want a teaser? pic.twitter.com/9AF5fqWLfX

For those perhaps still unfamiliar, Attack on Titan is the very popular 2009 manga series created by Hajime Isayama. Its story focuses on a special Corps of soldiers defending dwindling bastions of civilization from colossal humanoid titans. Kind of like Pacific Rim (except of course, the rip-off accusations usually go the other way because Attack on Titan came out first.) It was recently adapted into a very successful anime and is set to get a bunch of video games in the next few years. It seems like the crossover is going to be in comic or graphic form.

This east meets west visual crossover could be an unprecedented success. Would you be excited to see Spiderman tying up giant titans with way too menacing teeth? Let us know in the comments.