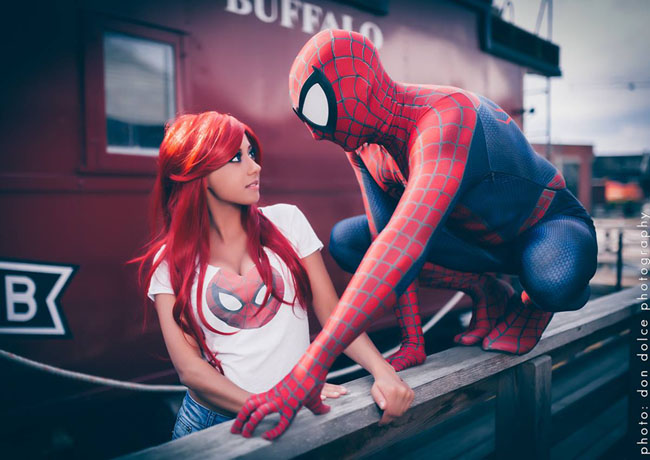 Mary Jane is a character that every Spiderman fan will know. The neighbor of Peter Parker, Spiderman’s alter ego, she made her first full appearance in 1966 in The Amazing Spider-Man #42. Her stunning looks and short skirts made her an instant rival for Gwen Stacy. While the main intention was just to have Mary Jane as a simple rival love interest, the popularity of the “M.J./ Peter Parker” coupling has made them one of the most famous couples in the genre. Mary Jane’s popularity has led to her being included in multiple comics, video games and movies. Her latest incarnation was by Kristen Dunst in the Spider-man films that debuted starting in 2002. ATC’s own Sassmira Cosplay has become the hot headed beauty in stunning photos. Paired across from Spiderman cosplayed by Spider_Inferno, her red hair blows in the wind. Wearing a white Spiderman shirt and jeans, she stares uncertainly at the web flinging superhero. Sassmira makes a stunning Mary Jane, and the exquisite photos are simply breathtaking. All That’s Cosplay Interview: Get to Know the Adorable Purblind Cosplay