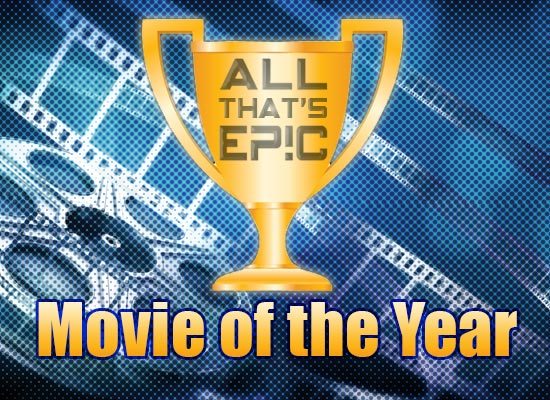 Welcome to our All That’s Epic Movie of the Year awards. Our dedicated team members each weighed in on their choices for the best film of the year, and the clear winner was..(drum roll)..The Avengers! Read all of our staff picks below to see our individual selections for “Movie of the Year 2012”. Movie of the Year Pick: The Avengers
The Avengers was something that was first teased as a project around 5 years ago, and now here we are in 2012 with numerous huge films involved, and it actually happened. The Avengers brought forth so many action packed elements, huge set pieces, a great story, every actor truly brought it, and for that, the film will always be known as the daddy of all Comic book films. The moment for me when I accepted its greatness, was when the camera descends way down low to the battlefield and panned around all The Avengers assembled and ready to kick some ass. Not a single person in the house could tell you they didn’t get some sort of action packed nerd boner at that moment. The Avengers not only delivered on the hype… but they took it apart, fed it growth hormones, made it ten times bigger and completely exceeded the hype. For that reason, the King dubs it, Sir Movie of the Year. Movie of the Year Pick: Les Misérables
A film where actors sing 99% of their lines is definitely not for everyone. But once you get past the musical weirdness, and despite a few cringe-worthy songs (oh, Russell Crowe, we love you anyway),”Les Mis” is something special. Director Tom Hooper resisted the temptation to overproduce the material, opting instead to shoot the major musical numbers in raw and unflinching close-ups where the actors actually sang their takes rather than lip-syncing them. The star-studded cast, which includes Hugh Jackman, Russell Crowe, Anne Hathaway, Eddie Redmayne, Amanda Seyfried, Helena Bonham-Carter, and Sacha Baron-Cohen, turns in stellar acting and mostly-impressive vocal performances. Expect a plethora of Oscars for this cast and crew. Even if you aren’t a hardcore theater geek, the story and performances will have you blinking back tears at times, while hoping that nearby moviegoers can’t see you.There were several films this year that could be called great, but Les Misérables is a unique and brave cinematic undertaking that rarely happens in formulaic Hollywood. For that reason, it is my choice for “Movie of the Year”. Movie of the Year Pick: The Avengers
Almost fifty long years after releasing the first Avengers comic, Marvel assembled them on the big screen. Fans and Critics alike deemed the movie a hit and the massive amounts of money it made in It’s first AND second run in theaters prove it. Top-notch acting and cinematography add up to be my personal favorite film of 2012 and I’m dying for more. There’s a hero for everyone and with no shortage of them Marvel’s The Avengers is undeniably a movie for everyone too. Movie of the Year Pick: Django Unchained
A soaring achievement from Quentin Tarantino, Django Unchained is the most ruthlessly brilliant film of the year. Following a freed slave who, with the help of a former dentist turned bounty hunter, goes looking for his wife, Django is everything you’ve come to expect from Tarantino: quotable dialogue, great characters, and a mish-mash of influences that combine together to create a nearly 3-hour rollercoaster ride of entertainment. I may have seen less films than I wanted to this year before making this list, but I have no doubt in my mind that Django Unchained will remain at this spot once I’ve had the opportunity to see other films. Quentin Tarantino’s best film since Pulp Fiction. Expect Christoph Waltz, Leonardo DiCaprio, and/or Samuel L. Jackson to fight over the Best Supporting Actor Academy Award. Movie of the Year Pick: The Hobbit
The Lord of the Rings trilogy was a masterpiece of cinema. It took the term epic and breathed new life into it as it pertained the big screen. Exotic locations, larger than life heroes and unforgettable battle scenes brought high fantasy to the main stream. The Hobbit continues this tradition, and manages to improve on the concept in a couple of areas. It’s a film for people who look outside their window and wonder what lies in lands far, far away. It celebrates the notions of camaraderie, loyalty and being bigger than your fears. For those who are diehard fans of the universe, the nods to the lore are incredibly satisfying. The Hobbit is a movie made for fans that still manages to appeal to anyone with a sense of wanderlust and is my personal movie of the year. Movie of the Year: The Avengers
The Avengers is my pick of the year because we have an all-star cast with Robert Downey Jr, Scarlett Johansson, Chris Hemsworth, Mark Ruffalo and others which in turn make for a great movie. The script and the story line are insanely remarkable as well. Comedy, action and suspense all in one Marvel Superhero movie which makes another great point in why The Avengers is my movie pick of the year! And who doesn’t love the scene where the Hulk smashes Loki into the ground and calls him a puny God? Talk about EPIC! Movie of the Year Pick: Django Unchained
This year was filled with many great movies, but finishing the year with a bang was Django Unchained. Django Unchained was filled so many different elements that make a movie great, but that is to be expected from the director of the movie; Quentin Tarantino. Django is a movie that felt satisfying throughout the whole movie and never had me feeling anything else but that. Quentin Tarantino did a excellent job at directing the movie by making every scene a work of art. The actors of the movie also never came close to falling short of wonderful acting. With everything this movie has to offer it steals my number one movie of the year spot. Just remember the D is silent. Movie of the Year Pick: Prometheus
Prometheus takes place between 2089 and 2093, following an anthropological research group. They uncover a cave painting of a star sytem at the Isle of Skye, in Scotland. Shortly after making a significant discovery they board a research vessel: Prometheus. They are following a star constellation that is repeated throughout several ancient civilizations’ linguistics. Funded by Peter Weyland himself, the planetary system is found peppered with unknown structures and life. Once again, Ridley Scott directs another fantastic film, and Prometheus deserves a spot at the top, therefore it is my top pick of 2012. Movie of the Year Pick: The Avengers
As a moderate comic fan, The Avengers movie became a huge thing to look forward to. Once I saw the movie, I was so happy I wasn’t let down. It was nice to see all the same stars back but the only disappointment I felt was not seeing Edward Norton come back as the Hulk. There were a few moments that had a lot of comedic relief from all the action which made the movie that much more enjoyable. The Avengers definitely wins Movie of the Year, hands down, with no other contenders coming close to this amazing film.