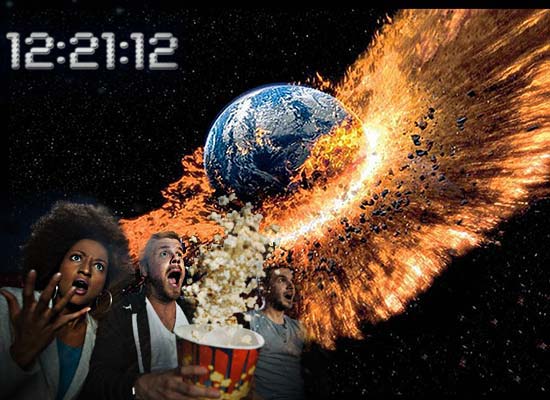 According the the Mayan calendar, the world is coming to an end on December 21, 2012. And this time, Will Smith, Bruce Willis and Tommy Lee Jones will not be coming to save our asses. Whether you believe the apocalypse is upon us or not, who doesn’t love a good doomsday movie?

We bring you a list of 15 epic films to prepare you for Earth’s highly unlikely demise. These cinematic treats cover the entire range of horrific disaster scenarios, from alien invasion to global warming to giant killer asteroid! So fire up your final meal, power on the Bluray, and enjoy!

It’s 2012, and a series of cataclysmic events are unfolding as predicted by the Mayan calendar. Geologist Dr. Adrian Helmsley and his team discover that the core of Earth is heating due to solar radiation. Worldwide leaders band together to to build arks to hold enough people to rebuild civilization. Meanwhile, writer Jackson Curtis learns that the world is ending, and tries to save his children and ex-wife from impending doom. Starring John Cusack and Amanda Peet. Released in 2009.

The Day After Tomorrow

A paleoclimatologist discovers that global warming is melting the polar ice caps, causing ocean temperatures to lower. The domino effect causes a disastrous climate shift which triggers a new ice age. A mass migration to the warmer south begins, with the northern USA and Canada already frozen over. Jack’s son, Sam, is in Manhattan on a trip with friends. Jack heads north to try and rescue his son, but there is little hope of escaping the cold. Starring Dennis Quaid and Jake Gyllenhaal. Released in 2004.

A seemingly minor earthquake in Los Angeles triggers a huge release of lava from the La Brea Tar Pits. The result is the birth of a new volcano underneath one of America’s busiest cities. City officials ignore the scientists’ early warning signs much to their own peril. Lava begins to spill out into the streets of Los Angeles, destroying buildings and wreaking havoc. Emergency Management director Mike Roark comes to the rescue, working alongside a fiesty seismologist. Starring Tommy Lee Jones and Anne Heche. Released in 1997.

A teenager and his science teacher discover a mysterious object in the sky, which turns out to be a comet heading directly for earth. NASA sends astronauts on a mission to destroy the comet. After the mission fails, special caves are built, and the government holds a lottery to select 800,000 ordinary survivors to join 200,000 scientists, soldiers, and other pre-selected officials. These 1,000,000 people will save the human population from extinction after the comet hits. Starring Morgan Freeman and Tea Leoni. Released in 1998.

War of the Worlds

Ray Ferrier is a divorced blue collar worker and absentee father. After his ex and her new husband drop off his teenage son Robbie and young daughter Rachel for the weekend, a complete alien invasion takes over the planet. Ray must fight to save his children, in the midst of an all-out battle for the future of mankind in this modern retelling of H.G. Wells seminal classic sci-fi thriller. Starring Tom Cruise and Dakota Fanning. Released in 2005.

Scientist Robert Neville was unable to stop the spread of an incurable virus that has wiped out most of humanity. Neville is the last human survivor in what remains of New York City. Surrounded by mutants, Neville continues to search for survivors, while looking for a way to reverse the effects of the virus using his own immune blood. But his search for a cure could be an impossible race against time. Starring Will Smith and Alice Braga. Released in 2007.

Five friends in New York are filming a party on a hand-held video camera. Their get-together is interrupted as the city is invaded by a gigantic monster of unknown origin. They try to escape as the city’s landmarks come raining down around them.The movie is the exact length of a DV Tape, with backstory shown through bits and pieces of video previously recorded on the tape. The movie follows their adventure and their struggle to stay alive. Starring Mike Vogel and Jessica Lucas. Released in 2008.

In 1959, students draw pictures of the future for a time capsule. One of the children scrawls strings of numbers on a piece of paper. In 2009, the capsule is opened. Young Caleb Koestler, whose mother has died, gets Lucinda’s “drawing”. His astrophysicist father, John, discovers dates of disasters over the past 50 years hidden in the writing on the drawing. Three future dates remain. Caleb starts hearing voices and is visited by a stranger who shows him a vision of fire and destruction. Starring Nicholas Cage and Chandler Canterbury. Released in 2009.

The Book of Eli

In a violent post-apocalyptic world, a drifter named Eli has been wandering across North America for thirty years. He carries a unique book, and survives by hunting and by scavenging and bartering goods. On his travels, Eli is offered a place within a mob-ruled village, whose leader covets his precious book. After Eli refuses to join them, Carnegie sends his gang into the wasteland to take the book from Eli. Starring Denzel Washington and Mila Kunis. Released in 2010.

A huge, global-killing asteroid, similar to the one that caused the extinction off the dinosaurs 65 million years ago is 18 days away from colliding with Earth. NASA, who is unable to stop the killer rock, enlists deep core driller Harry Stamper to train their astronauts on how to drill into the asteroid to plant a nuclear bomb. Instead, Harry assembles his own crew of oil drillers to embark on the ultimate earth-saving space mission. Released in 1998.

The Earth’s core has stopped spinning. Strange disasters are emerging all over the world: Birds acting strangely, crazy thunderstorms, and mass deaths of people whose pacemakers quit working. Dr. Josh Keyes and his crew travel to the center of the Earth to set off a nuclear bomb, in the hopes that they can make the Earth’s core start spinning again. If not, mankind will perish. Starring Hilary Swank and Aaron Eckhart. Released in 2003.

‘Mission Impossible 5’ Stops Shooting While Filmmakers Figure Out an Ending

In the future, the sun is dying, and the Earth is in another glacial period. After the failure of the Icarus Mission, a team of eight astronauts are sent to the sun in the Icarus II Mission to explode a weapon generating a supernova within the sun in the last hope of planet Earth. However, when a crew-member commits a mistake in the operation of the aircraft shield, he jeopardizes the survival of the group. Starring Chris Evans and Cillian Murphy. Released in 2007.

Mysterious and powerful aliens launch an all out invasion against the human race. The spectacle begins when massive spaceships appear in Earth’s skies. But awe turns to horror as the ships blast destructive beams of fire down on cities all over the planet. Now the world’s only hope lies with a determined band of survivors, uniting for one last strike against the invaders – before humankind is destroyed. Starring Will Smith and Bill Pullman. Released in 1996.

Agents Kay and Jay, are members of a top-secret organization that monitors and polices alien activity on Earth. The two “Men in Black” find themselves in the middle of the deadly plot by an intergalactic terrorist who has arrived on Earth to assassinate two ambassadors from opposing galaxies. In order to prevent worlds from colliding, the MiB must track down the terrorist and prevent the destruction of Earth. Starring Will Smith and Tommy Lee Jones. Released in 1997.

A hacker invades the computer of a man who is developing a powerful wireless signal, and accidentally releases a mysterious force that takes humans’ will to live. This causes a suicide epidemic. Together with his psychology-student girlfriend and friend, Dexter, they try to plant a virus in the network to shutdown the system and save mankind. Starring Kristen Bell and Rick Gonzalez. Released in 2006.

What are your favorite movies for the end of the world? Let us know in the comments below.