Check Out This Thorgeous Pinup Cosplay 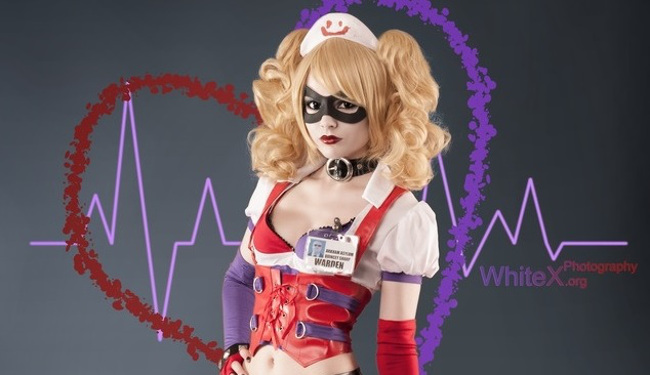 Harley Quinn is one of the most iconic comic book villains in Batman. With her spunky nature and harlequin attire, she has drawn a large fan following throughout the years. Closely associated to Joker and often rumored to be in a romantic relationship with him, she embodies the same comically twisted nature that he does.

Harley Quinn has been in the cosplay spotlight many times. With multiple versions of her from comic book variations to animated shows to video games, its no wonder that she provides endless amounts of cosplay inspiration. Cosplayer Blossom of Faelivrin has not only donned the masked villainess’ attire once, but twice, in sensational fashion. Her dark haired Harley Quinn is simple yet flawlessly executed. Gaining inspiration from the “Harley’s Revenge” DLC for Batman: Arkham City, she shows us another version of the harlequin beauty. With a red and black dress drawing from Harley’s original color scheme, she poses with playing cards emblazoned with “Mistah J” a nod to her love. In black and red shoes, she is ready to kick Batman’s butt. In another Harley Quinn cosplay, this time drawn directly from Batman: Arkham Asylum is of Harley’s nurse outfit. With a nurse cap embellished with a silly smiley face, she is ready to administer mediciation to her patients. She executes the costume perfectly, with red and purple boots, a white skirt, and red, purple and white top. She has the black choker, black and silver bracelet, purple and red gloves and even a medical id badge.

With two cosplay’s of Harley Quinn so remarkably executed, you can really see the love that Blossom of Faelivrin has for the character. Not only that, but the skill exhibited showcases her talent and passion for cosplay, making her an up and coming person to watch.