Get Slayed by this Cosplay of Sadira from Killer Instinct 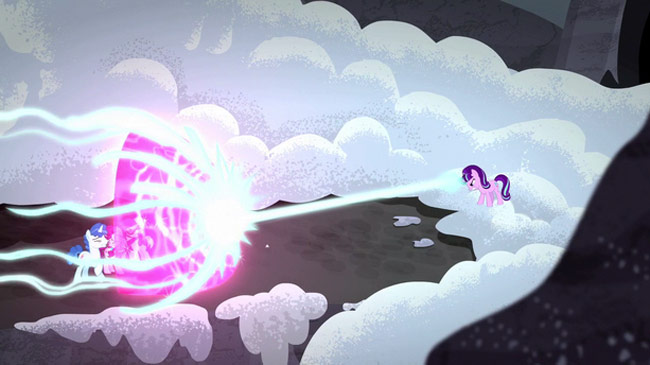 My Little Pony: Friendship is Magic is a show that has reached unpredicted success. Though aimed at a demographic of young girls, the shown has grown in popularity among adults due to its likeable characters, quality animation, and story telling. Sometimes this success can mask what the show was intended to be: a story following a group of colorful ponies as they learn about the magic of friendship.

As My Little Pony moves into its fifth season, there have been nearly one hundred episodes of invaluable lessons in friendship. Here we are going to look at ten of the lessons that resonated the most with viewers of all ages.

10) Do Not Worry About the Future “I’m gonna solve problems as they come, and stop worrying about every little thing!”

In “It’s About Time,” episode twenty of the second season, Twilight receives a message from her future self, warning her about some terrible event that is coming within the next couple days. In a sheer panic, Twilight does everything she can to stop whatever may happen, running herself into the ground with worry. In the end, she realizes that by worrying so much she caused the problems her future self warned her about. The importance of this episode is teaching people not to worry about the future, and deal with problems as they come up. “Sometimes it can be hard for a shy pony like me to stand up for myself. When I first tried it, I didn’t like the pony I became, but I learned that standing up for yourself isn’t the same as changing who you are. Now I know how to put my hoof down without being unpleasant or mean.”

Fluttershy has several moments throughout the My Little Pony series where she learns various forms of standing up for herself. “Putting Your Hoof Down,” the nineteenth episode of the second season, features the most important of these assertiveness lessons. After taking a seminar on speaking up for herself, Fluttershy becomes increasingly aggressive, and ends up hurting those closest to her. In the end she realizes that she can be herself and be aggressive at the same time. This teaches that there is a difference between being mean and being assertive.

Related: This Fluttershy Cosplay is Harmonious

8) Not All Friends Are the Same “There are many different kinds of friends, and many ways to express friendship. Some friends like to run and laugh and play together. But others just like to be left alone, and that’s fine too. But the best thing about friendship is being able to make your friends smile.”

“A Friend in Deed,” the eighteenth episode of the second season, features Pinkie Pie trying to become friends with a quiet, older donkey. Through her attempts at becoming friends, she realizes that not everyone treats friendship the way that she does. Though other episodes in My Little Pony show different types of friendship, this is the episode that directly addresses people see friendship in different ways. By changing how she approaches friendship, Pinkie Pie is able to befriend the older donkey, and make him smile. “Sometimes, the thing you think will cause you to lose friends and feel left out can actually be the thing that helps you make your closest friends and realize how special you are.”

“Call of the Cutie,” episode twelve of the first season, goes into the importance of a pony’s cutie mark, an indicator of their special talent. When Apple Bloom is one of the last in her class to receive her cutie mark, she is afraid that being different from her classmates will cause her to lose friends. However, she learns that she is not alone, and becomes close friends with other ponies without their cutie marks. The importance of this lesson is that it is perfectly fine to be different, and being true to yourself can lead you to making some of your closest friends.

6) Know the Difference Between Trying Hard and Being Reckless “There is a big difference between pushing yourself as hard as you can, and just being reckless.”

When trying to earn a spot on the Wonderbolts, an elite team of pegasi, Rainbow Dash is faced with the challenge of trying to impress the flying instructors. However, in “Wonderbolts Academy,” the seventh episode of the third season, Rainbow Dash learns the difference between trying your hardest and being reckless. It is fine to try your best to accomplish something, but you must be careful not to be reckless and put yourself, or anyone else, in danger.

5) Do Not Assume the Worst “Always expect the best from your friends and never assume the worst. Rest assured that a good friend always has your best interests at heart.”

“Party of One,” episode twenty-five of season one, can be known as the episode that Pinkie Pie goes crazy. Paranoid that her friends no longer want to hang out with her, Pinkie Pie gets depressed and starts talking to inanimate objects. Seriously, this actually happens in the episode. Though, as strange as the episode is, it does provide the valuable lesson that you should not assume the worst in your friends. Instead of jumping to conclusions you should trust that your good friends have your interests at heart. “It’s a tad easier to be proud when you come in first than it is when you finish further back. But there’s no reason to hide when you don’t do as well as you’d hoped. You can’t run away from your problems. Better to run to your friends and family.”

When Ponyville’s Town Hall needs repairs in “The Last Roundup,” episode fourteen of season two, it is up to Applejack to win the money needed competing in a rodeo. After not winning any prize money, despite placing in multiple events, Applejack is too ashamed to return home. So she avoids coming clean to her friends and family by taking on work at a cherry farm to earn money to send back to Ponyville. Her friends are able to track her down and bring her home, letting her know that it is all right if she did not win the money and that they would find another way to pay for the repairs. This episode has two lessons, the first being that you cannot run away from your problems. Second, and more importantly, is that even if you did not accomplish everything you had hoped for you still should be proud of what you did accomplish.

3) Friends Help Us Learn More About Ourselves “Each of my friends has taught me something different about myself! It was their unique gifts and passions and personalities that helped bring out the magic inside of me!”

One of the overall messages of My Little Pony is that everyone has their own unique talents, and it is those talents that make up special. “The Cutie Map – Part 2,” the second episode of the fifth season, takes this idea a bit further. When faced with a “utopian” town where everyone is the same, the mane six are able to show that having differences is not a bad thing. In fact, being different from your friends can teach you more about yourself, and in the end make you a stronger person.

2) Be Proud of Where You Come From “No matter where you go in life, you should never forget that you are the product of your home and your friends. And that is something to be proud of, no matter what.”

“Sweet and Elite,” the ninth episode of the second season, finds Rarity living among the elite in Canterlot, a bustling cultural center where the Princesses live. Using her connections Rarity is able to find her place among the upper crust, but worries about what may happen to her new life if her country roots were to be found out. As with many other episodes in the My Little Pony series, this one focuses on the dangers of lying and not being true to yourself. This one takes a sweet twist, however, when it teaches that you are the product of your home and friends. And, if you like the person, or pony, you are, then there is absolutely nothing to be ashamed of.

Related: My Little Pony’s Princess Celestia Looks Radiant as Ever in This Cosplay

1) Feminine Does Not Mean Weak “Just because some pony is ladylike doesn’t make her weak. In fact, by using her wits, a seemingly defenseless pony can be the one who outsmarts and outshines them all.”

As My Little Pony is a show aimed at young girls, this lesson is by far the best that Twilight Sparkle has ever learned. In “A Dog and Pony Show,” the nineteenth episode of the first season, Rarity, the most feminine of the mane six, is kidnapped and forced to use her talents to find precious gemstones. Though in a tight spot, she is able to use her wits to keep her captors wrapped around her hoof. In the end she is able to escape and, with the aid of her friends, lay claim to all the gems she found. This lesson allows young girls to know that being feminine in no way makes them weak, and that their wits can aid them in even the stickiest situations.