Cassandra Pentaghast is a Dream in This Beautiful Cosplay 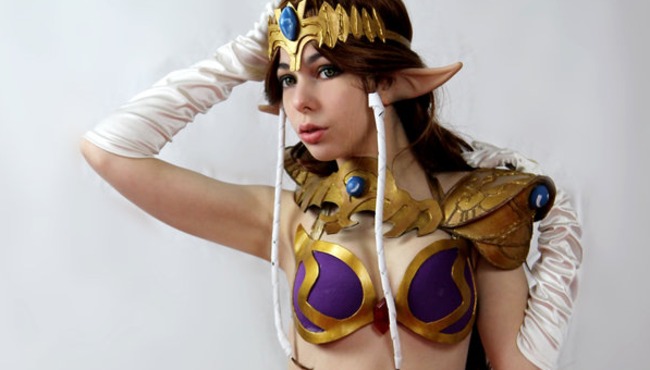 In honor of this week’s release of Mario Kart 8, we will be doing a week-long Nintendo cosplay event!  First up, let’s smash up two of nerd culture’s favorite princesses – Princess Leia and Princess Zelda. George Lucas introduced us to the stubborn princess in Star Wars Episode IV: A New Hope. Beyond the movie-verse, Leia eventually becomes trained as a jedi by her brother, Luke, and becomes a member of the New Jedi Order. On the flip side, Princess Zelda was initially introduced as the classic damsel in distress for the Link to rescue from the villain. However, her character eventually evolves and joins the ranks of other strong female video game characters. This mash up is perfect in many ways – both princesses are smart and witty, but tend to occasionally end up in problem situations and need a little assist to rescue. However, in the end, they are both spunky and full of fire to hold their fair share in a fight. And of course, there is the undeniable sex appeal in the popular Slave Leia look! U.S. Cosplayer Ryuu Lavitz has brought us a truly unique cosplay in this mash up of Slave Leia and Princess Zelda. She is perfectly beautiful and has many more cosplays that are just as cleverly put together! Her Harley Quinn is a fan favorite and she has several more cosplays from all genres ranging from anime to video games. She attends several conventions so be sure to check out her Facebook page so you can meet this incredibly creative and talented cosplayer!