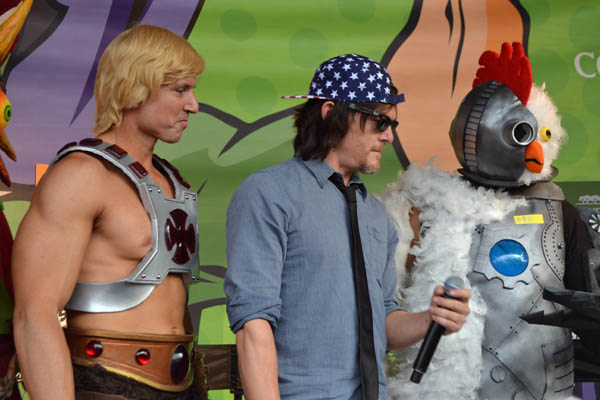 Fans of AMC’s The Walking Dead flocked to Courtyard’s Super Hero HQ at San Diego Comic-Con Saturday to watch actor Norman Reedus (Daryl Dixon) and Executive Producer Greg Nicotero judge a unique cosplay contest. Throughout the day, Courtyard had sent judges to scout the best cosplays on the show floor, with a few lucky finalists selected to display their costumes for the cheering crowd and the VIP judges.

Reedus took the time to show his love to the huge crowd, stopping to take selfies with fans, giving high fives, and signing autographs for those who had been waiting for hours to catch a glimpse of Daryl Dixon himself. Reedus’ first order of business was to trade his TMNT trucker hat for an audience member’s stars and stripes cap, explaining that he’d been trading hats with people all day.

Reedus and Nicotero were good-natured judges, cheering on the contestants and praising the creativity, time and craftsmanship that had gone into their costumes. After careful deliberation, as well as audience input, two lucky winners were chosen.

The cosplay competition was one of many events hosted by Courtyard in honor of San Diego Comic-Con. Earlier in the day, Nicotero and a staff of industry pros performed special effects makeovers on volunteers. On Sunday, Game of Thrones author George R.R. Martin was on hand to officially crown the king and queen of the cosplay contest.

Check out our pics of the Courtyard Super HeroHQ cosplay contest below: