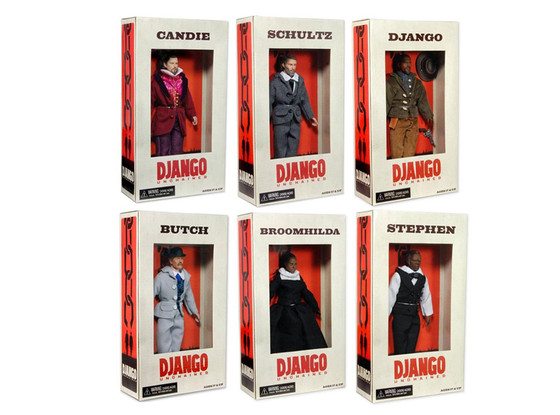 Action figures created for Quentin Tarantino’s Oscar-nominated Django Unchained are fetching top dollar on eBay and other outlets after The Weinstein Company announced last week that they were pulling the controversial toys off shelves. Rev. Al Sharpton’s National Action Network and several other civil rights groups called for a boycott on the toys, claiming that they are racially insensitive. Chances are, they are also less than thrilled that the film uses the “n-word” over 100 times. The Weinstein Company quickly responded by saying, “In light of the reaction to the Django Unchained action figures we are removing them from distribution. We have tremendous respect for the audience and it was never our intent to offend anyone.”

Tarantino has had action figures produced for all of his major films including, Pulp Fiction and Inglorious Basterds, so the Django toys were the next in line. “They were meant to be collectibles for people 17 years and older, which is the audience for the film.” At the time that this article was published, a complete set of the action figures had just sold on eBay for $5100! The original sticker price was $39.99 on Amazon, which proves that a little controversy is never bad for business.

The folks over at Screen Junkies got their hands on one of the action figures and took it over to South Central to get the community’s perspective. Check out the video below. What do you think? Are the Django Unchained slavery action figures offensive? Would you like to buy tiny plastic slave replicas to display in your home? As far as movie-themed toys go, are they as inappropriately awesome as the vibrating Harry Potter broomstick? You make the call!