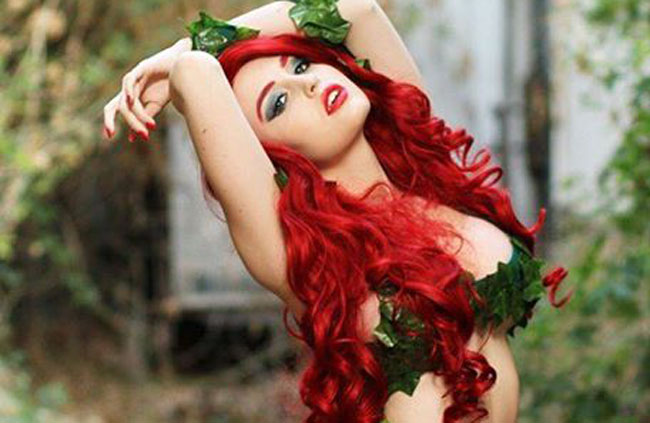 Poison Ivy Cosplay Will Leave you Itching For More Poison Ivy is one of the most iconic villains in Batman. A genius in biochemistry, Pamela Isley ended up undergoing significant mutations due to being exposed to a deadly plant based toxin. Surviving the ordeal she realized that she was now immune to plant toxins and was even able to control nature. The experience, however, also shattered her mental state, which led her down the path of the criminal. Adopting the moniker of Poison Ivy, she is the most prominent Eco-terrorist and one of Batman’s greatest foes. She is also Harley Quinn’s closest friend, even giving her the ability to withstand poisons. Cosplayer SuperMaryFace transforms into Poison Ivy in this seductive cosplay. In an outfit composed of leaves, she is one with nature. The costume covers her chest and bottom, with the leaves trailing along her stomach. Leaves also wrap around her legs and arms, giving the appearance that they have grown up her body. Vibrant red hair and lipstick finish off the look amazingly. Your Jaw Will Drop from this Prison School Cosplay