Mutant and Talented: A Brilliant Cosplay of X-Men’s Rogue 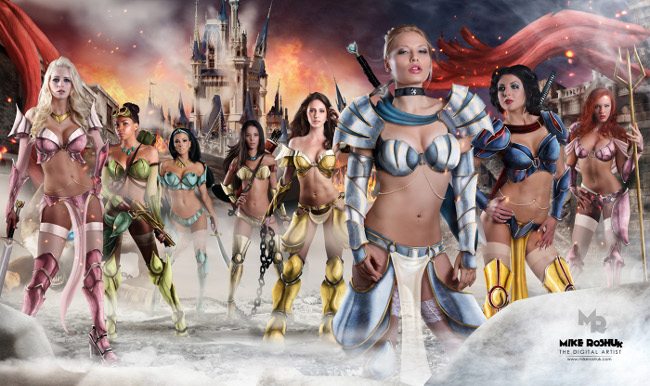 Disney Princesses are known around the world for their beauty and grace, elegance and poise. But what would happen if we took those same innocent sweethearts and threw them into the cut-throat world of warriors and barbarians. Epicness, that’s what. And the contrast here is what makes these cosplays truly amazing, because in this fairytale the beauty IS the beast. First up is the most famous princess of them all, Cinderella. Kicking the blue ballgown aside for an armor bikini, she is ready to take on any evil stepmother that may try to stop her. Next is the Little Mermaid herself, Ariel. Stealing the Trident was just step one in her plan to take her voice back from the evil sea witch. Now she looks ready to go after any part of this world. Pocohontas was a girl who, when she met John Smith, learned alot more about the world and about love. However, here she looks ready to defend her tribe from those intruders trying to take them down. Then there is Belle, the girl who decided that her father’s life was worth loosing all her freedoms. She stayed with the Beast and lived a life in captivity. This girl looks like she owned the beast and made him do her bidding. Most Popularly Cosplayed Characters of 2014: Jinx from League of Legends

Tiana has always been a fan favorite, she is a strong girl who wants to one day be very successful and open up her dream restaraunt. This Tiana however became the queen of the swamp, and really isn’t going to let anyone get in the way of what she wants. Jasmine, the princess who fell in love with the poor street boy, will now prove that she doesn’t need a man to rule Agraba. With her faithful yet ferocious pet by her side she is strong and lovely all at the same time. Finally there is the fairest (or should I say fiercest) of them all, the original princess, Snow White. She is no longer the sweet and innocent one waiting for her prince. She is making her own way in life and no one is going to stop her.

These newly imagined versions of some classic disney legends are nothing other than legendary. They are clearly the icons that has made Disney so popular, but in a way that makes them a lot more hardcore. Well done Mike Roshuk, we were thoroughly impressed and entertained with this rendition of our favorite princesses gone wild.