Matthew McConaughey Would be Open to Star Wars Film 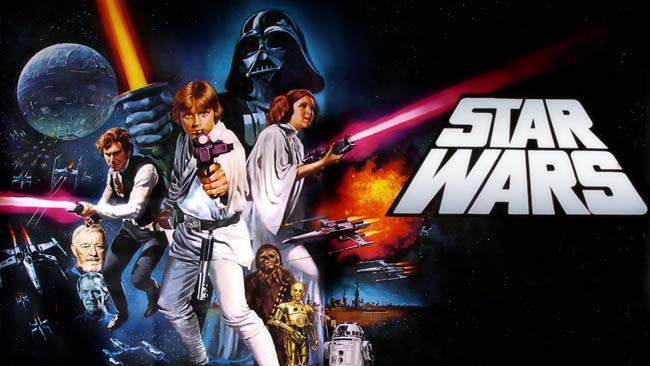 Ranking the Star Wars Films From Worst to Best

In case you didn’t feel it, there was a great awakening in the Force this past weekend. Beyond the millions of dollars it acquired and multitude of box office records it broke, Star Wars Episode VII: The Force Awakens stands as a reminder of why we love this universe and these characters. I stared in awe at the sight of the Millennium Falcon back on the big screen, struggled to hold back tears when Kylo Ren slaughtered Han, cheered when Rey used the Force to summon Luke and Anakin’s lightsaber and left the theater with a huge smile on my face upon seeing the final shot of Luke on the mountaintop.

Whether we’ve seen it once or multiple times, enough time has passed for all of us to process the experience. Now the question stands: how does it compare to the rest of the saga? Is the revelation that Kylo is Han and Leia’s son a worthy nod to the iconic reveal in The Empire Strikes Back? Is there anything in Episode VII that verges on prequel mishaps? The following is my personal ranking of the Star Wars films, ranked in order of least to greatest. Please note that this list is non-inclusive and feel free to provide your own in the comments.

#7 Episode II: Attack of the Clones

It’s practically a universal opinion to declare the prequel trilogy a huge deviation from the originals, and to regard it as the franchise’s weak link. Sorry George, but it’s impossible to overlook the one-note characters, excessive CGI and endless amount of mundane senate meetings. Moreover, Attack of the Clones takes all these elements and highlights them to an extreme. If Anakin isn’t whining to Padme about how Obi-Wan treats him, viewers are stuck watching the Republic officials debate amongst each other about the use of a clone army. Then by the time the final battle on Geonosis finally comes, it is almost entirely devoid of emotional conflict, given that it’s predominantly clones and battle droids fighting each other. Even the lightsaber duel with Dooku lacks a sense of urgency as this villain kind of just shows up and has no intentions of killing Obi-Wan or Anakin, despite being played the late and great Sir Christopher Lee.

Nevertheless, though I recognize the obvious flaws in the prequels, I can still appreciate the good aspects of each. This is partly due to the fact that I was in elementary school when they came out and still retain fond memories of seeing them in theaters, but that aside I think many fans fail to recognize that Lucas’ intentions here were different from what they were in the originals. Whereas the originals were all about exploring the idea of the hero’s journey in a space fantasy context, the prequels are meant to showcase how people come to power and thus provide an account of Anakin’s becoming Darth Vader. That said, this installment is really the beginning of this character’s turn to the dark side; and given that the only knowledge we had of the Clone Wars up until this point was through Obi-Wan’s brief retelling of it in A New Hope, it is at least interesting to see how this conflict unfolded. Still, nothing can make up for the infamous “I don’t like sand” scene.

For some, this is the worst of the prequels, thanks to a certain spastic Gungan obnoxiously sticking out his tongue and making us think “Me’sa want to cut you’sa with a lightsaber.” Even without Jar-Jar, we’re still left with trade negotiations, midi-chlorians and a prolonged pod racing scene. And if you’re really looking for an epic Phantom Menace rant, I suggest watching Red Letter Media’s famously ruthless review.

Yet for all its faults, The Phantom Menace does give us what is arguably the series’ best lightsaber duel, and certainly the best one of the prequels. While Darth Maul was criminally underused, he with his double-bladed saber shines in all his villainous glory as he squares off with Qui-Gon and Obi-Wan, fighting to the tune of John Williams’ iconic Duel of the Fates. Furthermore, whereas the whiny teenage Anakin didn’t quite strike a chord with fans, the innocent child slave in Episode 1 helps us empathize with him more. This arc adds another layer to the character which previously had been a mystery.

#5 Episode III: Revenge of the Sith

Despite its excruciatingly painful dialogue, Revenge of the Sith is by far the most emotionally intensive and rewarding of the prequels. Finally, we see Anakin’s transformation come to fruition and witness the birth of the Empire. From the opening space battle on the outskirts of Coruscant, Lucas shows us that this film is far more exciting and action-packed than the previous two. Contrary to Episode 1’s kid-friendly storyline, Episode III is a much darker tale which showcases how Anakin’s fiery passion and ambitions brought about his tragic downfall, particularly with the destruction of the Jedi Temple and the epic duel between Anakin and Obi-Wan on the volcanic planet of Mustafar.

Here, Lucas structures the story around classic themes of love, war and betrayal so as to draw parallels to real world politics. The separatist movement tends to mimic numerous terrorist organizations while the creation of the Galactic Empire reflects the Republic’s evolution into a fascist government. Though the emphasis on politics in the prequels is no doubt excessive, it does mirror the Shakespearean space opera themes which have been present in Star Wars from the very beginning.

#4 Episode VI: Return of the Jedi

Return of the Jedi is practically a beat by beat antithesis to Revenge of the Sith, right down to the title. We see Vader’s redemption as he saves Luke from The Emperor, the Empire fall as the second Death Star is destroyed and freedom restored to the Galaxy as the Rebel Alliance emerges from Endor victorious. While not without its faults, it stands as a great conclusion to the original trilogy, and also gives Jabba the Hutt a chance to shine in the opening act.

Like the Gungans, many fans possess an equally intense hatred for the Ewoks. I myself am not one of them, as I rather like the idea of a diverse range of species within the Star Wars universe. For every giant Wampa in the Galaxy, there is a furry little Ewok protecting the forests of Endor from Imperial forces; though I do admit it would’ve been awesome if Lucas had been able to go with his original plan to use Wookies in the finale. Yet whatever your feelings are regarding these creatures, we can all appreciate Return of the Jedi as an emotionally satisfying conclusion to cinema’s greatest trilogy.

At the time of writing this, it’s been just under a week since opening night, and I’m still in many ways trying to process it all. After years of anticipation for this installment, J.J. Abrams made good on his promises that this movie would harken back to the tone and themes of the original trilogy, while also introducing a new set of characters and storylines. Between Han’s mentor role, the effortless chemistry between Rey and Finn, Oscar Isaac’s swashbuckling rebel pilot Poe Dameron and the scene-stealing BB-8 droid, The Force Awakens is everything we could’ve asked for and more.

The only major complaint of this film is by people who dismiss it as a remake of A New Hope, which I would argue is a misreading of it. While it does rely heavily on story elements from the originals, the movie takes things in a new direction, particularly with Rey’s story and by making Luke such a vital part of the main conflict. Sure it has some pacing issues here and there, but overall it’s exactly what fans have been waiting years for. Also for a more in depth discussion on this installment, check out a podcast review I did with The Joy of Geek crew.

Now for the film that started it all. The original Star Wars is essentially George Lucas’ love letter to the films of the great Japanese director Akira Kurosawa, as well as to an array of classic sci-fi pulps like Flash Gordon. It intentionally follows the standard plot line of a farm boy leaving home to follow his destiny and become a great war hero so as to mimic the beats found within Joseph Campbell’s The Hero’s Journey. The result of its intricate mythology and world-building is that it spawned an entire universe and the definitive film franchise.

Who can forget the first time they saw the beam of blue light emanate from Luke’s lightsaber? Or when the Death Star exploded into a million pieces? Or when Han carelessly gunned down Greedo (AND SHOT FIRST)? Say what you want about Lucas, but the man made one of the best movies of all time, a masterpiece which is even more impactful than the Millennium Falcon making the Kessel run in less than 12 parsecs.

# 1 Episode V: The Empire Strikes Back

It’s the sequel that has everything you want: an epic opening battle on the ice-world of Hoth, an unlikely Jedi master in the form of the seemingly comical Yoda, Han frozen in the carbonate chamber, Boba Fett and Lando Calrissian’s big screen debuts and one of the greatest revelations in movie history. Directed by Lucas’ film school mentor Irvin Kershner and scripted by Leigh Brackett and Lawrence Kasdan, The Empire Strikes Back is the most exciting, crisp and emotionally driven film in the entire series.

The first lightsaber duel in the saga between an elderly Obi-Wan and Vader barely scratches the surface of how epic and visceral these fights can be. However, when Luke faces the Sith Lord whom he learns is his father in Empire, the swift movements of their weapons as they engage in ferocious combat fill the screen with intoxicating imagery and dazzling effects, which is heightened all the more by this scene’s emotional drive. While A New Hope started it all, Empire is the reason that the Star Wars legacy continues today.

For anyone who loves movies, pop-culture and space fantasy, Star Wars means something different to all of us. Yet whether you’re a Vader acolyte or simply a casual fan, you’ll likely be seeing The Force Awakens multiple times this holiday season. How would you rank the films? Sound off in the comments and May the Force be with us all.