New Photos from the Set of Star Wars Episode 7 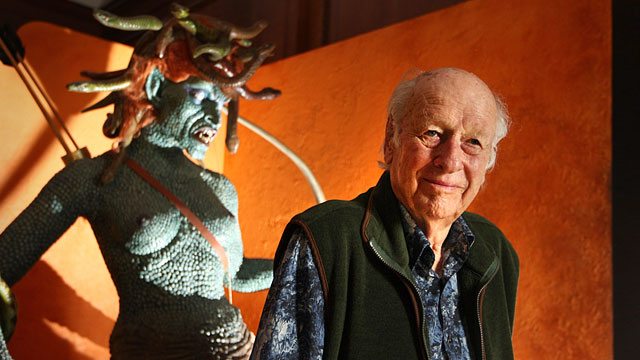 Many people may not know Ray Harryhausen by name. That’s okay because most people have still seen some of the legend’s work. In remembrance of Ray Harryhausen influential life. We here at Conslayer have decided to do a quick rundown of 5 of his essential films. Enjoy and celebrate the life and work of a great man!

One of Ray’s first and most well known films is the classic “Mighty Joe Young”. Some people may remember the more recent 1998 version, but nothing beats the awesome visuals from the original film.

The 7th Voyage of Sinbad

Sinbad is a pretty famous character, and he was ripe for Harryhausen to work on. Made during the middle of his career, “The 7th Voyage of Sinbad” has some great monsters and effects. Check out the snake woman scene!

Well known for Raquel Welch in the starring role. The film is also well known for having some amazing stop motion techniques and great dinosaur effects. Here is one of my favorite scenes from the film!

Clash of the Titans

Harryhausen’s last film, “Clash of the Titans” was remade several years ago. However, if you are like me you probably still like the original a lot more. Forget the cgi effects. I’ll take practical effects all day!

Jason and the Argonauts

It would, of course, be impossible to talk about Harryhausen without bringing up what is probably his most well known work. “Jason and the Argonauts” is an exceptionally fun adventure. While the acting may not hold up nowadays, the effects still look awesome and are the quintessential example of what Harryhausen was all about.