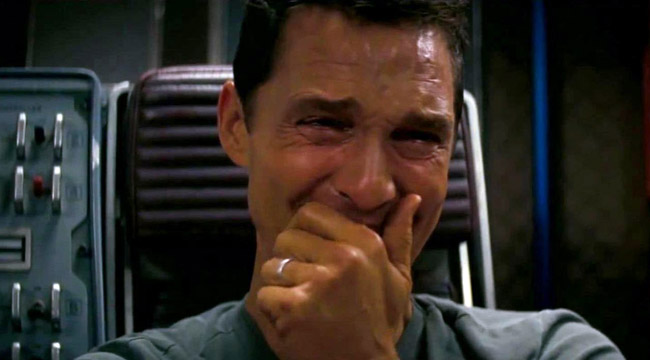 Alright guys and gals, let’s be real for a minute. We all have certain movies that we love and adore, and some of those films have such a special place in our hearts because of the emotions that they make us feel, bringing us to (or maybe beyond) the brink of tears. It’s okay, this is a safe place where you can open up and admit your feelings. There’s no judgement here.

At least, not a lot of judgement. But what makes a movie so special that we fight to restrain the ugly cry from its inevitable onset, while that lump in our throats threatens to choke the life out of us? Which movies have this effect? From the manliest macho bro to the sweetest and most sensitive guy, it’s time for some real talk as we discuss ten epic movies that turn any grown man in a snotty, sobbing mess. Though riddled with historical inaccuracies and misrepresentations of the American Revolutionary War, The Patriot was well received and is one of Mel Gibson’s best performances. The movie follows Benjamin Martin and his family as they struggle with life during the war, and all of its atrocities. Happy endings prevail, but not without some misery to accompany them.

The tear-jerkers: Any time anybody dies, which is early and often. More characters die in The Patriot than in Les Miserables, and that’s something to be proud of…I guess. Christopher Nolan’s 2014 space drama makes all other recent space films look like child’s play (looking at you, Gravity). It deals with the very interesting concepts of not just space, but the effect that space and gravity can have on time. Matthew Mcconaughey is on point throughout the film, as are his supporting cast. But more than a space film, Interstellar is about the strain that is put on the Cooper family’s relationships when their patriarch embarks on a mission to save the planet.

The tear-jerkers: There are a few throughout the movie, including when Coop leaves his family to go into space, and the climax of the film when the mysteries of time and space are unfolded. But the real heartbreaker is when Coop sits down to watch some video messages from his family, which span over twenty-three years. Even though his children are fully grown, thanks to the space-time continuum, Coop hasn’t aged at all. If you’ve ever wondered where Michael Bay’s penchant for blowing everything up stems from, I think Armageddon is the source. However, in 1998, Bay wasn’t all about explosions. He actually could create some decent movies without stupid jokes about male anatomy, bodily fluids, and over-sexualizing female characters that are clearly only there for their looks. Such is the case with Armageddon.

The tear-jerker: When the boys up in space discover that someone will have to stay behind on the asteroid and manually detonite the explosive, they reluctantly agree to draw straws. A.J. is the unlucky one, but has he steps outside, Harry sabotages his space suit, forcing him back inside the ship. Harry then takes his place as the manual detonator, and has one last Facetime (not invented yet) with his daughter. While it didn’t feature any princesses or magic carpets, Up centered around one of the funniest and most unlikely duos you could ever imagine. Russell’s over exuberance for just about everything, combined with Mr. Fredrickson’s grumpy old man demeanor, carry the film and offer plenty of laughs.

The tear-jerker: The opening scenes. Disney has never been more real and honest than in the first ten minutes of Up. People thought that Frozen was great for empowering its heroines, and I’m not taking anything away from that, but remember that time that Disney tackled the heartbreaking topics of infertility and real loneliness? After the first few scenes, I thought this movie should be called Down, because that’s how I felt.

6. Indiana Jones and the Last Crusade The best Indy film had everything going for it: An awesome plot, mythical religious relics and artifacts, great action, humor, and perhaps one of the best performances of Sean Connery’s life. As Indy seeks the Holy Grail, he must team up with his estranged father, master of Grail lore, in order to get the Cup of Christ before the Nazis do.

The tear-jerker: As earthquakes rip open the very ground that the Joneses stand upon, Indy clings to life as he reaches for the Grail, which lies just beyond his grasp. He is saved from certain death by the loving words of his caring father: “Indiana? Indiana… Let it go, son.” Never has the story of Macbeth been more family friendly and approachable than in The Lion King. Released right in the middle of the Disney renaissance (see how I mentioned Shakespeare and then a renaissance?), The Lion King is one of Disney’s most profitable films of all time, and has been released multiple times in theatres, including in 3D. The story, characters, and music help to make this Disney movie an absolute classic.

The tear-jerker: No surprises here. In the culmination of Scar’s plot to obtain kingship of the Pride Lands, he tricks Mufasa and Simba into a perilous situation, and savagely ends the King’s life. After the chaos subsides, Simba finds Mufasa’s body and mourns over his father’s death, while Scar convinces the young cub that it was all his fault. Long live the King. Warrior is a criminally underrated movie about the lives of two brothers, Tommy and Brendan, both of which have hopes of winning an upcoming UFC championship. They come from a broken home, and their individual lives could not be more different. As the tournament progresses, it becomes clear that the two brothers must fight each other in the final match, with only one being victorious.

Tear-jerker #1: After Tommy lashes out at his father, Paddy (Nick Nolte), telling him that nobody cares around him, Tommy returns to their room. He sees his father in a drunken stupor, after having spent the last three and a half years sober. Tommy calms Paddy down and gets him to bed, where he holds him until he falls asleep.

Tear-jerker #2: The final fight. Tommy and Brendan hold nothing back as they beat on each other, and as the fight draws to a close, one brother puts his pride aside and apologizes for everything he has done, and tells his sibling that everything will be okay. Tom Hanks is in this movie. That’s enough to convince most people to watch it. But if you haven’t, it’s about John Coffey, a death-row inmate convicted of the assault and murder of two young women. But the crimes don’t seem to suit Coffey’s personality. He is, by nature, soft-spoken and polite, and even possesses supernatural healing powers.

The tear-jerker: In a loose Biblical allegory, Coffey reveals that he is being sentenced to death for crime that he is not guilty of committing. But, rather than fight the charges, Coffey accepts his fate, and decides he no longer wants to live in a world filled with so much sorrow. He is killed in an electric chair while those whose lives he has changed for the better watch on in sorrow. The concluding chapter in everyone’s favorite childhood trilogy was a long time coming, but was worth every second of the wait. It is one of the greatest movies ever made, and has a whopping 99% approval rating on Rotten Tomatoes. It’s full of fun and nostalgia, and is an emotional rollercoaster that doesn’t let up until the credits start to roll.

Tear-jerker #1: The toys do everything they can to escape the devilish Sunnyside Daycare facility, but in the end, find themselves trapped and moving slowly towards a burning furnace and certain death. They look on united, holding hands, and await a fiery death.

Tear-jerker #2: Before going off to college, Andy takes his box of toys and gives them all to a young girl named Bonnie. Andy has a hard time parting with his toys, and explains to Bonnie why each one is important to him. Finally he gets to Woody, and the tears flow freely. Not from Andy, though. Just from you.

1. The Lord of the Rings: The Return of the King The concluding chapter in Tolkien’s Middle-earth saga is timeless. It shares the record for the most Academy Awards received, at eleven (I love that eleven almost looks like ‘elven’). While some think the 200+ minute film was a bit long, I still typically watch the extended version anyways. It’s a fitting end to one of the greatest works of film and literature of all time.

Tear-jerker #1: Frodo, all out of strength and will, is unable to complete the last leg of the journey up Mt. Doom to destroy the ring. Loyal Sam finds an extra burst of strength, and picks up his master, setting him on his shoulders, and ascends the steep, fiery slope.

Tear-jerker #2: As Aragorn is finally crowned King of Gondor, he is reunited with Arwen, and the rest of the Fellowship. When he approaches the Hobbits, they bow to him. But Aragorn looks almost heartbroken that they would do this, and he tells them, “My friends… You bow to no one.” He praises the valiant efforts of the halflings by in turn kneeling to them, and the entire present company follow suit.

Tear-jerker #3: Even though the ring has been destroyed and peace is restored to Middle-earth, Frodo still carries the emotional, mental, and physical scars of his brutal journey. These memories prevent him from being truly happy. In the ultimate act of love and respect, Frodo is allowed to sail west to the Undying Lands with Gandalf, Galadriel, and others. Frodo says his last goodbye to each of the Hobbits, ending with his beloved gardener, Sam. As Frodo boards the ship, he turns, and we see him smile, and he sails away.

That was rough! But we got through them all! What are your favorite movies that bring you to tears? Which ones did we miss out on? Make sure to educate us in the comments!