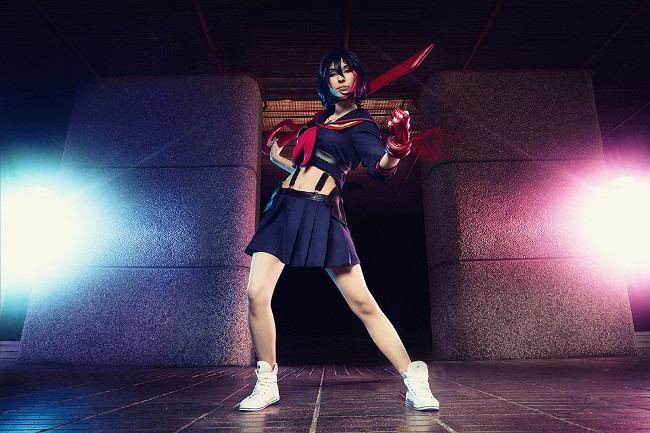 Ryuko Matoi is the 17 year old main protagonist of manga and anime Kill la Kill. She transferred to Honnoji Academy – where students often fight to the death – searching for the twin of her Scissor Blade, and the person who used it to murder her father. It’s later revealed that she was thought to have died after a failed experiment to fuse her with Life Fibers. She later learns that she’s the daughter of the series main antagonist, Ragyo Kiryuin, and little sister to Satsuki Kiryuin.

Ryuko is known for her sentient clothing, called Kamui, which grants her superpowers, and for her long, red blade, which is half of a mighty pair of scissors. The Scissor Blade is capable of cutting Life Fibers, which are otherwise indestructible. Her Kamui, a modified Sailor fuku, is called Senketsu. Ryuko is the only one who can communicate verbally with Senketsu. Also, this living clothing feeds on her blood. Ryuko has a relatively simple personality: fierce and stubborn. She fears little, and fights even when she’s clearly overpowered. She’s also rather modest when it comes to how she’s dressed. When forced to fight in Senketsu’s very revealing form, Ryuko gets quite embarrassed, and it takes her a bit of time to accept the skimpy look and realize Senketsu’s full power.

Illisia Cosplay has done a masterful job of sewing, crafting, and styling to bring her cosplay of Ryuko to life. Her version of Senketsu is completely on point, including the black piece with the white X on it that represents an “eyepatch.” She certainly looks the part, and her badass expression just adds to the awesomeness. And that Scissor Blade? Wow. It looks perfect. Her wig work needs to be commended as well. The styling and attention to detail is just fabulous. Illisia really owns this character. She’s got the look (even the sneakers!), the poses, and attitude down pat.