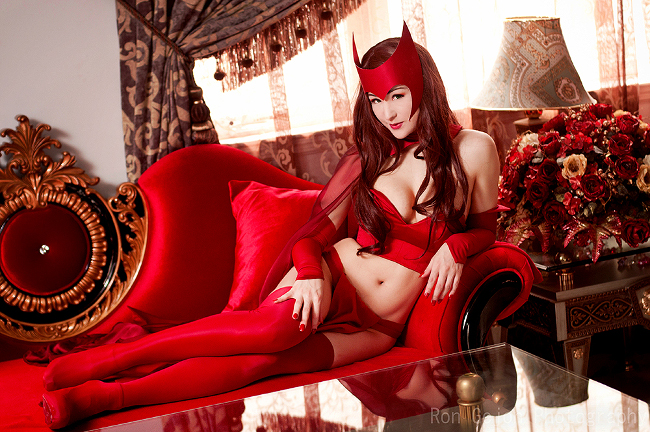 Scarlet Witch is a mutant that can alter probability by using hex-spheres. The twin sister of Quicksilver and daughter of Magneto, she also inherited the ability to cast magic. At first a villainous member of the Brotherhood of Mutants, she switched sides and fought with the X-Men. After Magneto wounded Quicksilver, they both joined the Ultimates, a group of superhumans gathered to fight the increasing risk of supervillains attacking the United States. While Scarlet Witch maintains a similar red hued outfit to the one seen in previous versions, one of the outfits she dons while in the Ultimates is more provocative then her earlier attire. Cosplayer Mostflogged recreates the sexy ensemble. Still with her iconic cape and head piece, she is easily recognizable. Wearing a strapless bustier and bikini bottom, Scarlet Witch no longer covers her body in fabric. Wearing red thigh high boots, Mostflogged is ready to throw some hexes.