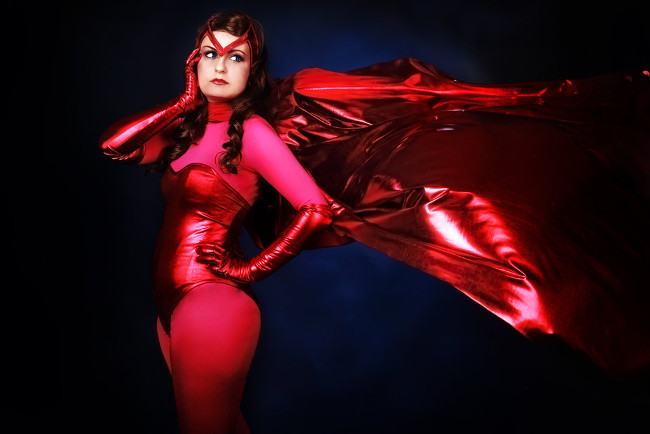 Scarlet Witch Comes to Life with Glowing Color in this Cosplay In 1964, Wanda Maximoff made her first appearance as Scarlet Witch in X-Men #4 as part of the Brotherhood of Mutants. A mutant with the ability to control probability, she can cast hexes to affect outcomes, usually negative, for her opponents. Later on she has the power to cast chaos magic due to Cthon changing her as a baby. When Magneto is captured and the Brotherhood of Mutants dissolved, she changes her ways and joins the side of good, becoming one of the Avengers. Donning Scarlet Witch’s iconic red attire, cosplayer Amapolchen sparks life to the hex caster. With cascading brown locks framing her face, the pointed mask draws your attention to her bright blue eyes. The metallic red of the leotard, boots and gloves stand out against the lighter pink bodysuit. Flowing from behind her is a magnificent shining cape, a must have ingredient for a Scarlet Witch costume. With strong poses that radiates a magical aura, Amapolchen embodies Scarlet Witch effortlessly.

Seductive Ahri Cosplay Will Leave You in Awe