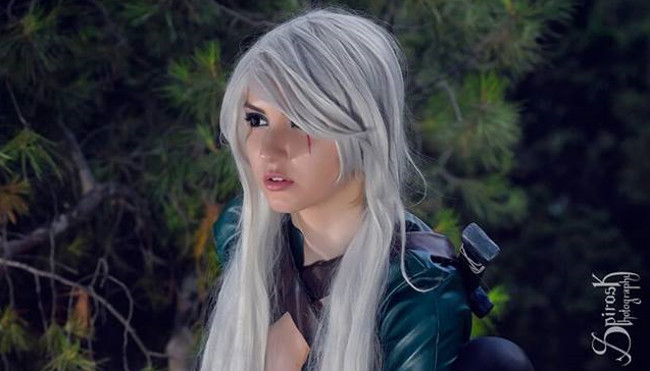 Score a Pentakill with this Mercenary Katarina Cosplay

Katarina is one of the preeminent soldiers in the Noxian army. Daughter of a high ranking general, she has had various training since she was a child and showed great promise with a sword. Wanting to show off her talents in combat, she begged for her first mission. This mission ended up being the assassination of a low ranking official. Seeing that a high ranking officer was at the same camp when she arrived, she prided herself in taking him out. Much to her dismay, however, that low ranking official led an attack which resulted in many Noxian casualties. Returning to the now heavily guarded camp she fought her way to her original target, sustaining the injury which left the scar across her eye, an ever present reminder of her duty. Cosplayer Eve Estenzia is a beautiful assassin in her Mercenary Katarina cosplay. Green jacket covers her black bustier and black pants finish her basic wardrobe. Spiked greaves and arm guards make up her armor. Wielding amazingly crafted twin swords, she lies in wait for her next victim.