Bow Before the Elven Prince of Mirkwood with this Legolas Cosplay 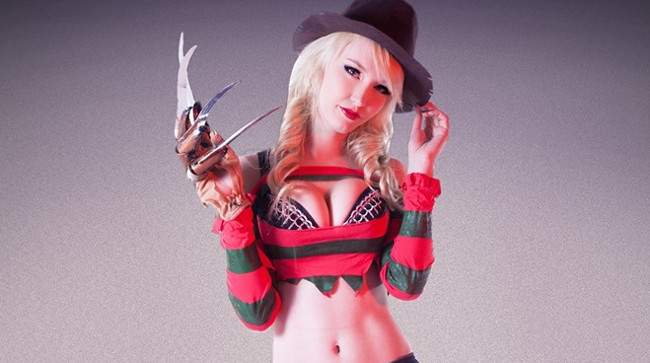 “One, two Freddy’s coming for you…” Those words are all that is needed to scare the teens of Springwood, Ohio in the iconic horror movie A Nightmare on Elm Street. Freddy Krueger is not your average, everyday serial killer, but one that taunts and slaughters his victims in their dreams. Using his bladed glove, Freddy was an instant horror success, scaring people awake. Even years later, Freddy remains a much loved character. Cosplayer Kelly Jean shows off her devilish side in her kotobukiya rendition of Freddy Krueger. This femme fatale version of Freddy retains the red and green striped shirt, his brown fedora and of course his iconic glove. The shirt is ripped up as if she has been in a fight, showing off her bra and there are bloody scratches on her legs. One leg is adorned with fishnets while the other is is clad in latex. Wearing short shorts and black boots, Kelly Jean is dangerously seductive. Relax by the Koi Pond with this Nami Cosplay