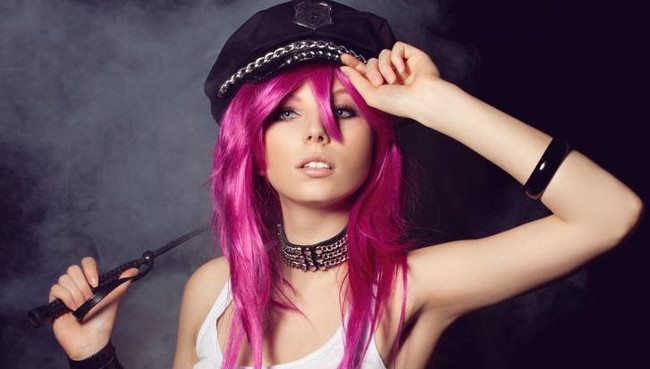 Street Fighter’s Poison is a force to be reckoned with. Sporting pink hair, ‘Daisy Dukes’, and a riding crop, she is not afraid to aerial kick any up-and-coming enemy into oblivion. But this infamous enigma has a dark past and unknown future that has had fans up in arms for decades. She first appeared in the Final Fight video game series by Capcom in 1989, originally an enemy and member of the “Mad Gear Gang”. She worked almost exclusivley with Hugo as his “manager” and friend. She is known to be sexy, sultry and a tad bit mysterious. Mysterious in the fact that there has been much debate over the argument that Poison is a transgendered man, and statements from Capcom’s own don’t really help the confusion. Some fans say yes, some fans say no. Either way she is a sexy icon that has gone down in the Capcom history books. She has made several cameo appearances in various Capcom games since Final Fight, but she was never a playable character until the newest game, Ultra Street Fighter IV. This publicity has made her more popular than ever. This cosplay by CaptainV is a great example of just how much fans love the historic characters that made this game series great. Rocking it out in Poison style, CaptainV certainly deserves a round of applause.