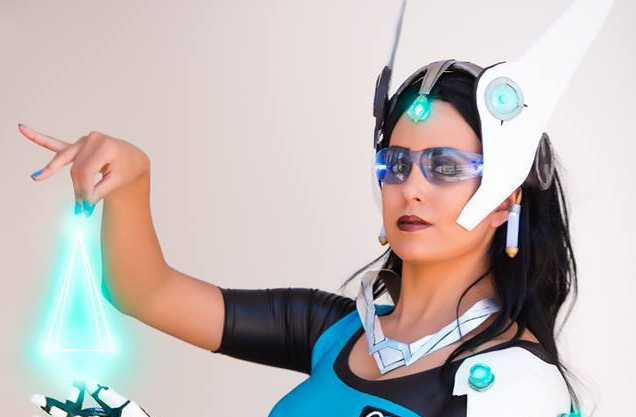 Symmetra, born Satya Vaswani, was chosen to become a hard-light bending architect and was plucked from poverty to attend Vishkar’s Architect Academy. Though initially feeling lonely and isolated, Satya quickly rose to the top of her class. She approached hard-light manipulation differently than her other classmates, instead weaving her constructs in the motions of the traditional dance of her homeland. The Vishkar Corporation saw great potential in her abilities and gave her the name “Symmetra”, sending her on clandestine missions across the world to further the company’s interests. Khainsaw‘s Symmetra is a futuristic beauty, with a triangle of hard light between her hands standing in one of Symmetra’s signature poses. The craftsmanship of this costume, especially the fastidiously detailed robotic arm piece and headset really mesh well with the fabric choices for the costume. Khainsaw made all of these factors work in tandem to create a dimensional and high caliber cosplay!