Cosplay Video Tutorial: How to Use Body Paint for Cosplay 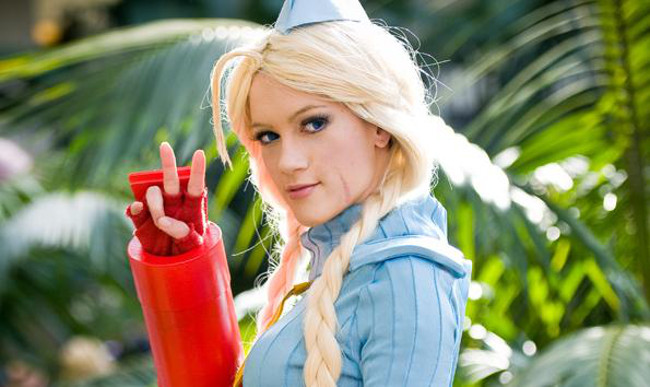 And what a target we have! Jessie Pridemore’s Cammy from Street Fighter is a perfect balance of beauty and power. Street Fighter is a classic fighting game which began in 1987 as a popular arcade game. It has evolved into an entire series of Street Fighter games that involve battling characters from all over the world. Beginning her mission back in Street Fighter 2, Cammy is an iconic character and all around badass. Her usual garb consists of a red beret and green military style thong leotard. Jessie is cosplaying Cammy’s new costume that started with the game X-Men vs. Street Fighter. Known now as Killer Bee, Cammy has swapped out her green army style for a more airforce attire. No matter her garb though, Cammy is always ready to take down anyone opposing her. Cammy is well known for her long blonde ponytails and military attitude. Jessie Pridemore’s cosplay of Cammy is not only gorgeously constructed, but she has truly brought Cammy to life. Jessie has pulled off this signature pose of Cammy’s, and her beauty and talent is clearly visible.