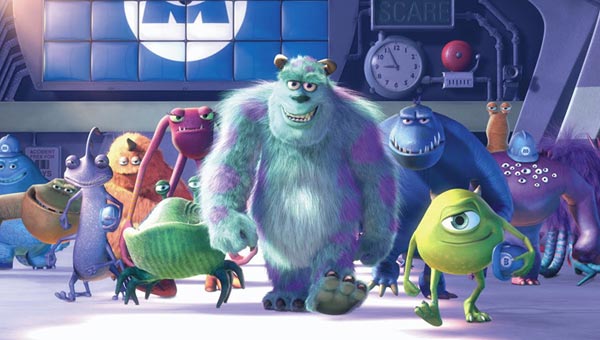 Since it first began in 1986, Pixar has released some of the most creative films of all time. From Toy Story to Ratatouille, Pixar is to animation what Studio Ghibli is to anime.

While some may argue that the company has lost its touch in recent years with films like Cars 2 and even Brave, others are eagerly anticipating the studio’s next major releases. Furthermore, no one can deny the impact Pixar has had with its rich cinematic history. With both Inside Out and The Good Dinosaur coming out this year, here are my picks for the top five Pixar films.

5. Up (2009): A movie about a house that floats in the sky isn’t an easy sell, even for an animated film. But leave it to Pete Docter and his fellow creative geniuses to deliver one of the most original and emotionally driven films Pixar has ever released.

Up is a movie which is and should be treasured by film lovers of all ages. The first five to ten minutes of the film do what only a handful of other movies have done: they make even the most cold-hearted viewers cry like little girls. Seriously, if your heart doesn’t break watching the main character Carl lose his wife, you may want to see a therapist or something. That montage showcasing the warm memories, trials and tribulations of their marriage is filled with emotion and cinematic ingenuity.

Beyond that, Up goes beyond sentimentality to provide a fun, humorous and heart-warming tale of Carl’s transformation, resulting from the bond he forms with an inquisitive boy named Russell. This one is a true gem and it’s one that’s difficult to surpass or duplicate. 4. Finding Nemo (2003): Another tearjerker, Finding Nemo contains both a great story and some of the most memorable characters in Pixar’s history. Each one in the film possesses their own corky traits which makes them unique. Nemo’s dad Marlin is a clown fish who isn’t funny, the blue fish Dory has short term memory loss and is as such continually asking questions, Bruce is a shark who vows that “fish are friends, not food,” and Nemo himself has trouble swimming as a result of a bad fin.

The humor and originality within Finding Nemo culminate perfectly in its conclusion, as Marlin and Nemo finally reunite with one another. Each learn a great deal about themselves over the course of their journeys, making the heartwarming ending of the film a direct contradiction to its tragic opening. 3. The Incredibles (2009): The Incredibles is not just one of Pixar’s most fun and delightfully imaginative films, but also one of the best superhero movies of all time. While not based on any comic book, it bears an X-Men resemblance, but with very much its own twist.

Writer-director Brad Bird explores the concept of a superhero family and a registration act like government law which forces them to hide their abilities. This proves most difficult for the father of the family, the once great Mr. Incredible.

Bird crafts a story which appeals to adults as much as it does to kids through its diverse range of characters and action propelled plot. Whether it’s the quick witted dialogue of Samuel L. Jackson’s Frozone character or the giant robots used by the villain Syndrome, The Incredibles has something for every moviegoer that makes it such a classic. 2. Monsters, Inc. (2001): John Goodman and Billy Crystal provide the voice talents for one of Pixar’s funniest, most clever and emotionally gripping films. While it could’ve been nothing more than a fun concept, Monsters, Inc. delivers on every level of its execution, from story to its groundbreaking computer generated aesthetic.

This is Pixar’s fourth feature, with its chief creative minds including Pete Docter, Andrew Stanton (Finding Nemo) and Lee Unkrich (Toy Story 3). While Crystal’s one-eyed sidekick character Mike Wazowski is an iconic component of the film, its defining aspect is the relationship between Goodman’s Sully and the child Boo. Their friendship becomes the bridge between humans and monsters and thus changes both their worlds forever. The themes, characters and innovative technical aspects of Monsters, Inc. make it without a doubt one of Pixar’s finest achievements. 1. Toy Story 1-3 (1995-2010): With all three Toy Story films being such quintessential components of not only Pixar’s roster, but of cinema, each are pretty flawless in their own right. As one of the best trilogies in movie history, I really wish they would leave it alone instead of making a fourth installment, which is set to arrive in theaters in 2017.

Head-honcho John Lasseter and his team capture the imaginative spirit of our inner child in these films. Whether Woody and Buzz get trapped inside Sid’s house, are up against a toy-snatching salesman or find themselves prisoners in a daycare center run by a psychotic teddy bear, their adventures are some of the most memorable aspects of any movie lover’s childhood. And like the opening montage in Up, the ending to Toy Story 3 should make any sane human being cry their eyes out. Conclusion: Whether or not you think Pixar’s most recent projects are good, all of us here can agree that the studio has given us some of the most beloved and original animated films ever to appear on the big screen. The movies on this list are timeless classics which hold a special place in the hearts of every film lover, and it is their intrigue and imagination that make me more than excited about Inside Out and The Good Dinosaur.