A Sexy Princess Peach Cosplay to Start Your Week

Cosplay of the Day: This Ada Wong Cosplay is Drop Dead Gorgeous

This Corpse Bride Cosplay Will Never Fade Away 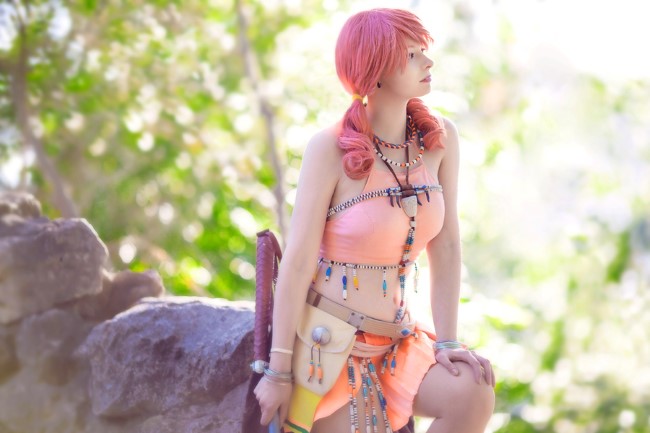 The Adorable Vanille from Final Fantasy in a Gorgeous Cosplay Final Fantasy is a long-running, role-playing video game series by Square Enix. The epic scale of the stories and game play, along with the sheer beauty of the games’ artwork and design have given the franchise an iconic, almost cult-like, popularity. Final Fantasy XIII debuted in Japan in late 2009 and sold over one million copies on its first day of sale. Released worldwide in March of 2010, Final Fantasy XIII would go on to sell over 6.6. million copies. To say that the game was a hit would be an understatement. This installment of Final Fantasy takes place in the fictional floating world of Cocoon, whose government, the Sanctum, is ordering a Purge of civilians who’ve supposedly come into contact with Pulse, the much-feared world below.

The narrator of the game is a pretty, kind-hearted woman named Vanille. Though she’s not one of the main protagonists, she is a playable character and is a l’Cie – a human “branded” by divine entities and given great powers, as well as a Focus to fulfill. Thirteen days before the start of the game, Vanille and her friend Oerba Yun Fang awake from a crystal stasis, initiating events that will lead to the Sanctum Purge. Also known as Oerba Dia Vanille, her full name stands for Vanille of the Dia clan, from the village of Oerba. As a l’Cie of Pulse, Vanille is feared and considered to be evil by people of Cocoon. This lovely, mysterious character looks younger than her years. She has a childlike curiosity and innocence, but is mature and considerate. She can sometimes be headstrong and stubborn, but is generally empathetic and understanding, and can easily be driven to tears. That said, she’s the kind of girl who likes to laugh, and is definitely nice to have around. Vanille cares deeply for others, especially for her close friend Fang. She’s the type to remain positive in situations that seem hopeless, though this part of her personality is a cheerful facade that hides her guilt and fear. Throughout the story of Final Fantasy XIII, Vanille grows as a person and learns to stop running from her problems. Vanille seems like someone who loves to accessorize. In the grand tradition of Final Fantasy, her outfit and look is nothing short of fabulous. And fabulous is a great way to describe Elanor Elwyn‘s cosplay of Vanille. Check out that beadwork! Elanor gets Vanille’s trademark jewelry spot on. Vanille’s hair is described in some online resources as being “bright red,” but it can look more orangey pink in the game. Elanor gets the hair -and eyebrows! – just right. Of course, it wouldn’t do to overlook the rest of the outfit. There’s the adorable pink pastel top, the little orange and yellow skirt, and the brown pelt, which is used to carry her weapon. The details on this cosplay are astounding. From the belted pouch, to the excellent Binding Rod, to the picture-perfect moccasin boots, nothing in this cosplay is overlooked, not even the make-up. She even has Vanille’s green eyes. Elanor looks like Vanille from head to toe, and that look is absolutely beautiful.

The Many Faces of Cosplay: Becoming Super Sonico!