Cosplay of the Day: A Fem Freddy to Meet You In Your Dreams!

Get Bitten by This Striking Black Widow Cosplay 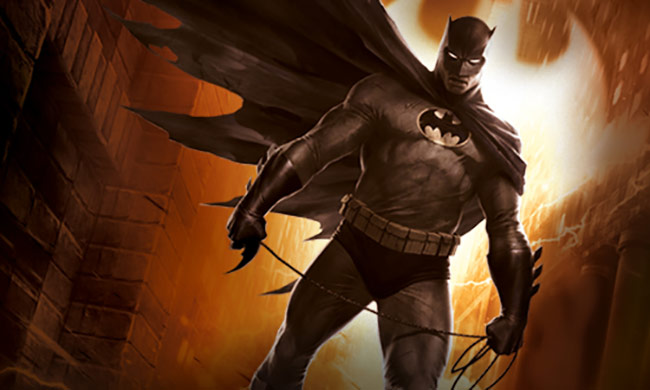 Marvel may be the dominant force at the box office when it comes to superhero movies, but DC has always reigned supreme in the world of animation. From the era of the 90s and early 2000s cartoons to the plethora of feature-length adaptations, many of the company’s animated works manage to outdo the quality of even the best live-action comic book movies. And with the much anticipated Batman: The Killing Joke animated film set to come out this summer, let’s take a look at some of the top movies from this category, all of which are essential viewing for any DC fan.

NOTE: Neither Batman: Mask of the Phantasm or Batman Beyond: Return of the Joker appear on this list, as I consider both films to be in their own league of absolute perfection. To include them would be too obvious. And if you haven’t seen them, what are you doing with your life?

7. Batman: The Dark Knight Returns Parts I and II Based on Frank Miller’s seminal graphic novel from the late 80s, The Dark Knight Returns tells the story of an aged Bruce Wayne, who put up the cape and cowl ten years earlier, following the death of Jason Todd. Now as a new gang emerges in Gotham City and The Joker is on the verge of being released from Arkham, Batman must come out of retirement and plunge himself into a world unlike anything he’s ever dealt with.

Beyond being more or less a panel by panel adaptation of the comic, the film does its best to capture the sociopolitical elements which form the basis of its story. Between the Reagan-era setting, the introduction of the female Robin Carrie Kelley, pivoting Superman as an antagonist in the final act, and examining Batman as a fascist vigilante in a society of social liberals, like Watchmen this series was a game-changer in the comics world, and has inspired a number of other DC films since. Christopher Nolan certainly pays homage to it in the latter half of The Dark Knight trilogy, and Zack Snyder concocted some Snyder-ized version of it in Batman V Superman: Dawn of Justice. With its rather graphic violence and sexual themes, it is surprising that this movie avoided an R rating, particularly with how faithful it is to the comic. Regardless, DC animation veteran Jay Oliva delivers an epic two-parter with great storytelling and a stellar cast of voice talents, chief among them being Robocop star Peter Weller as Batman. Based on another iconic graphic novel by the late and great Darwyn Cooke, Justice League: The New Frontier is a fantastic tribute to the 1950s Golden Age of comics. Uniting Superman, Wonder Woman, The Flash, Batman, Martian Manhunter and Green Lantern in a battle against a mysterious entity linked to the evolution of mankind, the story offers a unique spin on the origins of DC’s iconic team.

In an age where DC is often criticized for being too dark, a trend they’re now trying to counteract with their new comics lineup Rebirth and by promoting Geoff Johns to co-president of the film department, The New Frontier provides a more optimistic tale which utilizes elements of classic sci-fi. Starring voice talents such as Neil Patrick Harris, Kyle MacLachlan, Lucy Lawless and Phil Morris, and from the creators of the Batman and Justice League cartoons, this one is nothing less than a gem of superhero cinema. Flashpoint was the comic that paved the way for DC’s New 52 reboot in 2011. In it, Barry Allen travels back in time to prevent Reverse-Flash from murdering his mother, and in doing so drastically alters the timeline. Upon finding himself in an alternate reality in which he is stripped of his powers, Barry discovers that a massive conflict has ensued between Aquaman and Wonder Woman. As the forces of Atlantis and Themyscira wage war across the globe, Barry teams up with Batman, who in this universe is not Bruce but Thomas Wayne, to save Earth and undo these catastrophic events.

The movie not only remains faithful to the Geoff Johns and Andy Kubert storyline, but even manages to add another jaw-dropping twist involving The Joker midway through. Ever since Crisis on Infinite Earths, DC has had a particular fascination with alternate universes, and in this case that’s a good thing, because it’s such a rich story. And given that the recent Rebirth #1 special is more or less a Flashpoint sequel, there’s no better time to give this one a watch. Though Suicide Squad: Assault on Arkham would be a more apt title, this is still one heck of a movie. Assault on Arkham is in part an origin story for DC’s antihero team, but also a crime thriller inspired by the Arkham Asylum video games. As Amanda Waller sends her newly formed black-ops team Task Force X to infiltrate Arkham and retrieve vital information from The Riddler, Batman meanwhile tries to locate a bomb planted by The Joker inside the asylum. The Squad consists of Deadshot, Harley Quinn, Captain Boomerang, Killer Frost, King Shark and Black Spider; and as they plunge deeper into their mission, they soon realize that Waller is keeping secrets from them.

Over the course of its 75-minute runtime, the movie injects itself with the perfect balance of action, humor, suspense and pure comic book-propelled adrenaline. Directors Jay Oliva and Ethan Spaulding, along with screenwriter Heath Corson, provide a well balanced story which doesn’t dwell too much on the familiar team-up origin tropes, and instead takes us right to the action. Featuring Neal McDonough, Hynden Walch, Giancarlo Esposito and the legendary Kevin Conroy in his iconic Batman role, this is a movie you need to watch and the filmmakers of the live-action Suicide Squad movie in August need to take notes on. Superman/Batman: Apocalypse combines two of the best elements of the DC universe: Supergirl and the New Gods. Upon Superman discovering his long-lost Kryptonian cousin Kara Zor-El, it isn’t long before Darkseid, lord of the planet Apokolips, learns of her existence as well and kidnaps her. With Darkseid intent on using Kara to replace Big Barda as the leader of his female warriors, the Man of Steel joins forces with Batman, Wonder Woman and Barda and takes the fight to his turf.

Apocalypse is the kind of epic DC is built upon. On the one hand it explores the New Gods mythology created by Jack Kirby, while on the other it balances itself with a character study of Supergirl. The little sister/big brother relationship she has with Clark is really at the heart of the story, and it’s an added bonus that Supes and Batman are voiced by none other than Tim Daly and Kevin Conroy, while Kara is brought to life by Firefly alum Summer Glau. With its visceral action and solid storytelling, this is one of several top-notch animated films director Lauren Montgomery brought us. Before the Amazonian Princess hits the big screen in her solo movie next year, revisit the 2009 animated classic which showcases her origin. Following the accidental arrival of Steve Trevor on the island of Themyscira, Diana must escort this man back to his world. Yet when a hellbent Ares seeks revenge on her and the other Amazons for the death of his son Thrax many years earlier, Diana must become the warrior she was destined for, and save not only her world, but mankind’s.

Wonder Woman has pretty much always been the go to female superhero who everyone knows, but that doesn’t mean her story is easy to do well. I attribute much of this film’s quality to the fact that DC brought on critically acclaimed comic book writer Gail Simone to help with the script. Sure we had seen this character brought to life for years in the Justice League series, but by giving her her own movie it allowed for a deeper exploration of who she really is. Between the story, Lauren Montgomery’s direction, and the voice talents of Keri Russell, Nathan Fillion and Alfred-freaking-Molina (so many Marvel/DC crossovers), the 2017 live-action version definitely has a lot to live up to.

1. Batman: Under the Red Hood Batman: Under the Red Hood is DC’s Winter Soldier. Not only are both movies about the hero facing their former sidekick after they’ve returned from the dead as a villain, but they are both character-driven stories which prove that superhero movies can be just as emotional as any other kind. Following the murder of Jason Todd at the hands of The Joker, the story takes place several years later, when a new menace calling himself the Red Hood wreaks havoc in Gotham. Soon however, Batman learns that the man beneath the mask is his former partner, resurrected via the Lazarus Pit and determined to rid the streets of criminals permanently.

There’s so much to love in this film. My favorite scene is toward the end when Jason asks Bruce why he allowed Joker to live, saying that if it were the other way around he’d have killed him in a heartbeat. He then lets out his emotions, as he says that his reason for wanting vengeance is because Joker separated Bruce from him. I don’t know about you, but that moment for me is a tearjerker, as it captures the unshakable brotherly bond between Batman and Robin. It’s that kind of drama, in addition to the fantastic animation, that makes this my favorite DC animated movie.

Conclusion: Honorable mentions include Green Lantern: First Flight, Justice League: Gods and Monsters, and I hope to add The Killing Joke to this list soon. What DC animated movies are your favorites? What stories do you want to see in the future? Sound off in the comments!