Stormtroopers Receive New Life with a Hip-Hop Feel through Cosplay 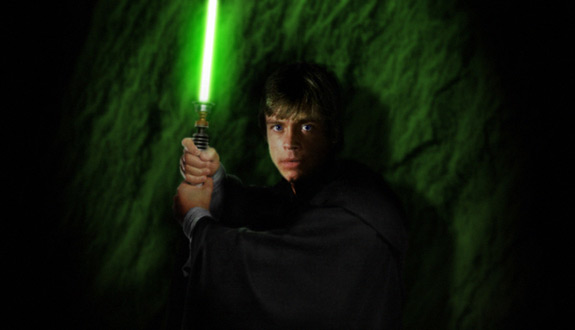 Luke Skywalker in Return of the Jedi

Since the teaser for Star Wars Episode VII was first released, nothing on the entire internet has been more controversial, more criticized, and more debated than the new Sith Lightsaber. There are basically two arguments against the new lightsaber design; the cross-guard offers no real protection to the user because any strike from an opposing blade will cut the cross-guard clean off, and also that the cross-guard is extremely dangerous to the hands of the user. Arguments for the new design address these concerns. As Stephen Colbert suggests, the cross-guard is not separate from the main blade, and thus would NOT be cut off from a direct strike. And as far as the cross-guard being dangerous to the user, any Jedi or Sith using this type of weapon would be well trained and would be able to fight without risk of self-injury, and could even use the cross-guard offensively as well.

But all arguing aside, the cross-guard definitely has practical uses, and (just as importantly in my opinion) it just looks pretty bad ass.

So, with that in mind, here are some of the coolest lightsabers from the Star Wars universe. Who doesn’t love a little retro? This lightsaber makes its first and only film appearance in Star Wars Episode VI. As a kid, the Pit of Carkoon was one of my favorite scenes in any movie, let alone Star Wars, particularly when R2-D2 throws this classic lightsaber up in the air for Luke to catch and use against Jabba and his crew.

This lightsaber totally is representative of Luke coming into his own as a Jedi Knight. It is the first lightsaber that Luke constructed, and is the first time that we see a green lightsaber in the films (watching chronologically by release date, of course). The hilt is sort of clunky and looks a bit awkward, but that is all part of the charm. It’s simple and totally recognizable, and its history makes it one of the more important lightsabers in the films. Hopefully they bring this one back for Episode VII. Picture this: A young Jedi is pinned up against a wall, face to face with an enemy. He has long since lost his lightsaber during a duel, but then, from under his cloak, the Jedi pulls out a backup lightsaber with a small hilt and a short blade. He is able to make contact with the enemy, and the fight resumes.

In the films, Yoda is the only Jedi that we see using a short-bladed lightsaber. His short saber is seen in Episode II and Episode III. And while Yoda’s lightsaber isn’t necessarily exceptional, the concept of a shorter blade is enticing. While a true Shoto blade never appears in the Star Wars films, this lightsaber is often used throughout the comics and novels. Luke uses a red-bladed Shoto lightsaber to fight against Lumiya (who uses a lightsaber whip, which is also pretty awesome) in “Duel with a Dark Lady” (Marvel Star Wars, 1985), as seen in the image. Notice how Luke’s Shoto is just over half the length of his standard lightsaber. I, for one, would love to see this two-handed style of fighting adopted more heavily into the film series. This is one of the more interesting lightsabers out there. It is an ancient weapon, and one of the earliest forms of the common lightsaber. This weapon has two things going for it that make it so epic. First, the Darksaber is shaped more like a steel sword than a traditional lightsaber, with a flat blade, curved edge, and even a small cross-guard. Second, and most obvious, is the blade’s black color. The color is achieved by the blade drawing in light and color from all around it, creating an effect similar to a black hole and leaving a soft white glow around the blade. Awesome.

The Darksaber doesn’t make an appearance in the film series, which is a shame. But it does appear in The Clone Wars TV series, and is used by Pre Vizsla in a battle against Obi-Wan Kenobi. Later, Darth Maul defeats Pre Vizsla in a great battle and claims the Darksaber as his own. Mace Windu’s lightsaber is awesome and completely distinct because of its purple blade. Until Episode II, there were only the three classic lightsaber colors — red, green, and blue. Then Mace Windu comes along and changes everything up. Windu’s lightsaber also stands out among the others because it is also the first time that we see an electrum hilt, which gives the hilt a gold, high-class finish. Electrum is rarely used to construct the hilt of a lightsaber, and is reserved only for the highest ranking of Jedi.

There are multiple theories online about purple blades, including that a purple lightsaber is used by those who used to be Sith, but then reformed and chose the path of light. Therefore, mixing a red lightsaber and a blue one equals a purple blade. But the real story is so much better, and so much more typical Samuel L. Jackson. On The Graham Norton Show in 2013, Jackson explained that during the arena battle scene in Episode II, he was concerned that he couldn’t pick himself out from the crowd with hundreds of lightsabers spinning around. So he asked George Lucas if he could have a purple lightsaber instead of a green or blue one. Lucas said that a purple lightsaber isn’t really traditional, but Jackson told him “Yeah, but I want a purple one. I’m like the second baddest Jedi in the universe next to Yoda,” and the rest is history. You can watch the hilarious interview here.

Apparently Darth Maul gets all the cool lightsabers.

In a movie filled with useless and irritating characters, sub-par acting, and the creepiest Yoda you’ve ever seen, Darth Maul is a welcome addition to the film. Sure, he has hardly any dialogue. And sure, as a character he is pretty shallow. But this nightmarish Sith wields one of the coolest, if not THE coolest, lightsabers in the whole film franchise.

I still remember seeing Episode I in the theater on opening weekend. When Darth Maul fully reveals this awesome saber, my eyes just about popped out of my head. Darth Maul totally takes the lightsaber game to a new level with his iconic weapon. The option to fight using only one blade is useful. But when Darth Maul combines the double blades with his quick martial arts fighting style, the result is epic, and maybe one of the best lightsaber battles in the entire series.

Take a lesson from this lightsaber. Like the cross-guard lightsaber, when it was first revealed it was totally new and likely very dangerous to an unexperienced user. But it allowed the film to show off a totally new style of fighting that is easily the best part of the movie. Who’s to say that the new lightsaber won’t have the same effect in Episode VII?

What’s your favorite lightsaber? Let us know in the comments!