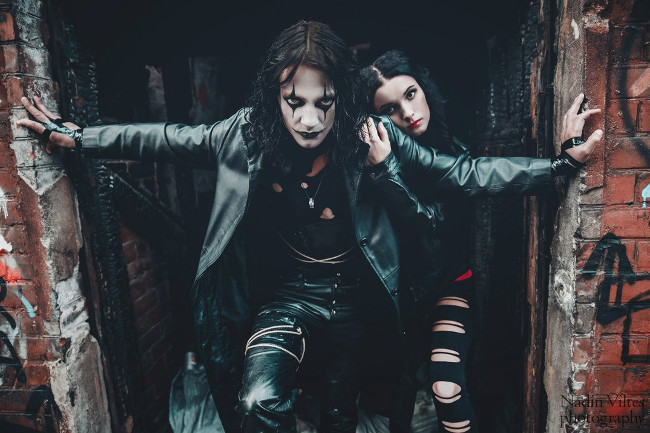 Based off of James O’Barr’s comic, The Crow was a hit movie in 1994 starring Brandon Lee. One Devil’s Night when the city of Detroit erupts into crime, Eric Draven and his fiancee Shelly were murdered in their home. Preparing to wed the next day on Halloween, Eric’s spirit cannot rest. Returning from the dead to avenge the grisly crime, he becomes the Crow. With the ability to see through his crow’s eyes and regeneration, he seeks out the gang that ended his life. Almost Human Cosband has done a marvelous job recreating The Crow. With the face paint reminiscent of a porcelain harlequin mask, the black slashes over his eyes and black lips, are frightfully accurate. With leather pants and trench coat, he is ready to take down those that wronged him. Showing signs of battle, his shirt has holes in it. The femme fatale along side him dons ripped leggings, a matching leather jacket and luscious red lips. The duo have brought The Crow to life with their flawless cosplay.