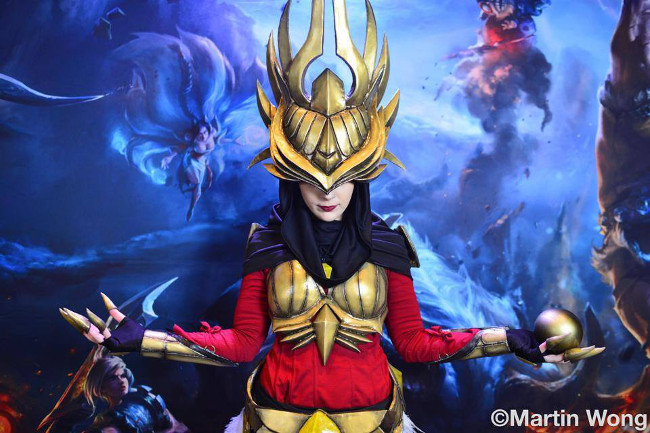 Some women take a while to be sure of themselves, but Syndra was never doubtful of who she was. In fact, from the moment her magical abilities flourished the woman took it advantage of it and nourished her skills to what they are now. Marveling in her abilities, Syndra has spent day in and day out attempting to perfect them, taking down those who threatened to stop her along the way. This includes her mentor, who only wished to teach Syndra restraint but instead ended up being the one to pay with his life.

Perhaps Syndra’s dark appeal is what draws gamers in. It could be that, or devilishly good looks. Either way, players of League of Legends have taking a liking to the champion. Of course, gamers aren’t the only ones who have sparked an interest in Syndra. Amongst the groups of people who choose to play as Syndra, there are also cosplayers who love her just as much. Bloodraven Cosplay is one of the handfuls of cosplayers who choose to take on Syndra, but this girl has made the character all her own. Instead of opting to don Syndra’s default skin, Bloodraven Cosplay chose her Justicar skin. The tones of gold and red blending beautifully together in order to take this cosplay over the top. While other’s have tried to reach this level of brilliance, only few have achieved it and Bloodraven Cosplay is one of the few.

This Cosplay of League of Legends’ Nidalee is Fiercely Beautiful