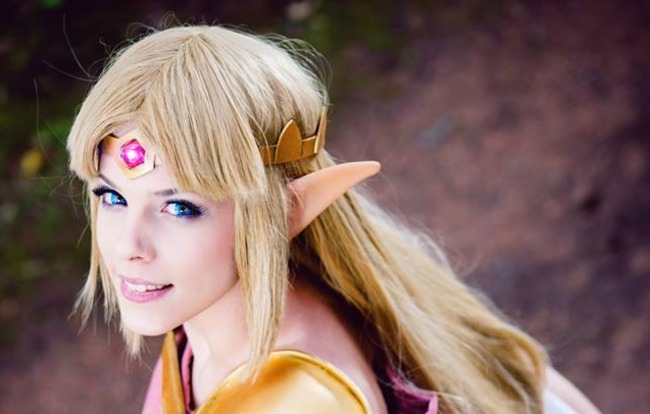 The Iconic Zelda in a Gorgeous Cosplay Though Link may be the big the star of the high-fantasy The Legend of Zelda series, what would that enduring franchise be without Princess Zelda? Over the years, and through various eponymous games, a television show, Super Smash Bros., a manga adaptation, and other media, Zelda has gone from a traditional damsel in distress to a more active and powerful agent of change. The latest installment in the franchise, The Legend of Zelda: A Link Between Worlds, is the seventeenth official game in the Zelda series, and the first to be developed specifically for the Nintendo 3DS. An indirect sequel to A Link to the Past, it features a similar world and style of gameplay. This critically acclaimed game stays true to the themes of chivalry and saving the damsel in distress by once again imprisoning Zelda (this time in a painting) and requiring Link to fight many good fights to save her. Still, it’s only with Zelda’s aid that he’s able to defeat the big bads and restore the Triforce to both Hyrule and the alt dimension world of Lorule. Zelda’s abilities, age, and disposition change somewhat from game to game, but she is always benevolent, caring, and wise beyond her years. She’s the quintessential fair maiden, beautiful, elegant, and almost always in the guise of royalty. And sometimes she can be downright adorable, as seen in this wonderful cosplay by Maho. Since Zelda is younger in A Link Between Worlds, it’s appropriate that Maho’s cosplay is more cute than alluring. Maho does an excellent job of embodying the immensely popular princess. In addition to the adept costuming, her expressions and poses capture Zelda’s sweet charm and graceful demeanor. This handmade cosplay is topnotch in its attention to detail and authentic look. The blond hair, armored shoulders, jeweled diadem, and sweeping gown are beautifully rendered. And, of course, no Zelda cosplay would be complete without the elf ears. In all, a very well done cosplay. Even if someone isn’t familiar with the newest of The Legend of Zelda games, Maho’s cosplay is immediately recognizable as the beloved Princess Zelda.