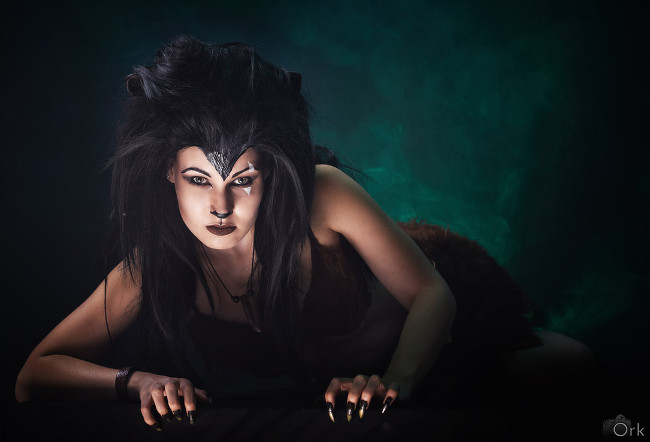 Anyone who has ever watched The Lion King knows who Scar is. The cunning and ruthless younger brother of Mufasa is not an easy character to forget. Plotting endlessly to seize power, he controls a pack a hyenas, sending them to do his dirty work. Killing off Mufasa then blaming the death on his son Simba, he ravishes the land, a tyrant among both lions and hyenas.

While Scar may be an evil, slightly skinny lion, Marijke‘s cosplay of him is most certainly the opposite. She has taken the villainous Scar and given him an aura of beauty. She has large black hair and lion ears. Across her eye is Scar’s namesake. She has long claws on her fingers. Feline inspired make up enhances the lion feel of the piece as well as the fur outfit she is wearing. While gorgeous in execution, the posing and expressions highlight the savage nature of the beast, showcasing Hills of Myst’s fantastic skills in becoming her chosen character. In one of the photos she is even holding a white mouse, eyeing it hungrily, just as Scar had done in the movie.