‘Guardians of the Galaxy’ Anime Debuts in Japan

An X-23 Cosplay Ready to Slash Through Foes

Nebula Cosplay is Ready to Battle in Style 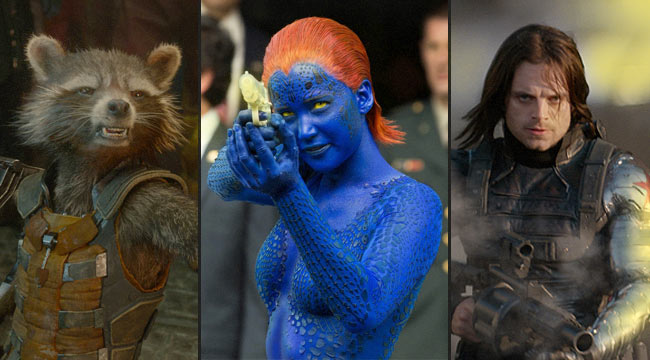 How Hollywood is Redefining The Superhero Movie Genre

In one theater, a brooding, emotionally-scarred billionaire mourns his dead parents the only way he knows how—by using his considerable riches to enforce vigilante justice in a crime-ridden inner-city. And in another, a talking raccoon and his partner-in-crime, an anthropomorphic tree, jet around a vibrant spacescape making wisecracks.

These two films are, apparently, part of the same genre. Let that sink in. Both are classified simply as superhero movies, a category of film that’s been more-or-less dominating the box office since Bryan Singer’s X-Men sparked the trend.

Now, fourteen-plus years later, the comic book craze is going stronger than ever—three of such films cracked the top ten box office earners of 2014. The future of the genre looks similarly bright—Marvel Studios already has plans to release multiple films within their ever-expanding film universe each year until 2019.

By most measures, this genre should be ready to topple under the bloated weight of so many sequels, crossovers and reboots. After all, Hollywood history is littered with similar fads that died out before they were a decade old, whether that genre be the spaghetti western, the film noir, the classic monster movie, or the demonic horror flick.

Most genre fads come and go, but superheroes somehow endure. There’s a reason too—the comic book adaptation is no longer a straightforward category of film. This so-called genre is widening each year to encompass other types of stories, other genres of film, within it.

Let’s look at the facts, starting with, of course, Marvel Studios: the two most successful comic book movies of 2014 were Guardians of the Galaxy and Captain America: The Winter Soldier, both Marvel properties.

Guardians of the Galaxy is a huge departure from the old model of comic book success—brooding hero, big name-recognition, secret identities. Even for a superhero team, our Guardians are more in line with the ragtag Star Wars rebels than the Justice League. This, ladies and gentlemen, is a science-fiction film—a planet-hopping space opera, in fact.

Meanwhile, Winter Soldier follows a top government operative-turned-fugitive as he discovers the operation he belongs to is rotten with corruption from the top-down. The fact that our hero occasionally wears a mask doesn’t change the fact that this is a classic spy thriller.

While these may be the most obvious examples, Marvel’s expanding roster of characters has routinely pushed them away from classic comic book film setups and towards stories where super powered heroes once feared to tread—isn’t Iron Man 3 a buddy cop action movie at heart? Isn’t the first Captain America a throwback anti-Nazi war film?

Even outside of Marvel, Christopher Nolan’s Dark Knight trilogy found success as morally-ambiguous crime thrillers in the vein of Michael Mann, and the latest incarnations of the X-Men saga leaned heavily on a period setting and Cold War politics.

With so much variety within the genre, a film like, say, DC’s controversial Man of Steel feels stale and predictable by comparison. The Amazing Spider-Man films were similarly divisive.

These are the films that stick to the old tropes of superhero films—particularly the origin story template laid out by Sam Raimi’s 2002 Spider-Man. Meanwhile, the smartest filmmakers and studios use comic book heroes as a jumping off point to explore other genres.

Despite this general trend towards storytelling diversity in comic book films, many movie fans and critics, depressed by a Hollywood era so heavily dominated by sequels and reboots, are still praying for an end to the comic book craze. (Read: Criticwire Survey: Are There Too Many Superhero Movies?)

The detractors have their points—even the most original modern superhero flicks overuse certain characters and story beats (the tendency killing off and immediately resurrecting a hero comes to mind)—but most of them ignore precisely what’s kept the genre relevant so long in the first place.

Genres don’t stay popular forever, nor should they. There will come a day when viewers will tire of comic book films, but the genre’s ever-increasing versatility means it’s anyone’s guess when that day will finally arrive. Until it does, most moviegoers can entertain themselves watching humanoid raccoons and emotionally-scarred vigilantes—because, let’s face it, they’re not really part of the same genre.