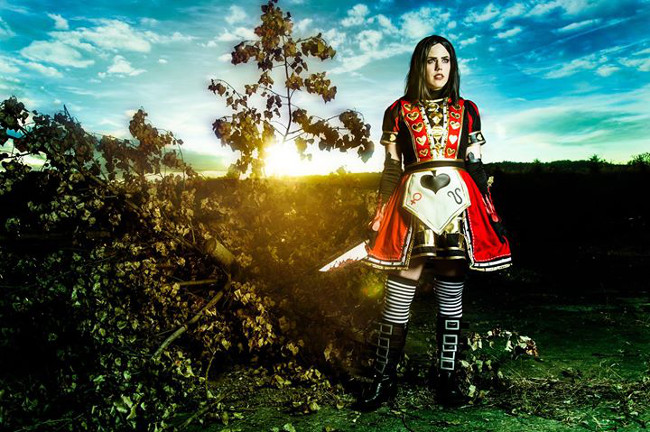 The beautiful Alice who falls into wonderland has a sad history of mental instability. In American McGee’s Alice, this is explored. As she watches her family die in a horrendous fire, she falls into a catatonic state and it sent to Rutledge Asylum. Here the White Rabbit comes to fetch Alice and bring her back to Wonderland as she is looked upon as their only salvation from the Queen of Hearts. After returning from Wonderland, she is released from the asylum. Here begins the story of Alice: Madness Returns. Alice suffers a mental breakdown that thrusts her back into the world of Wonderland. Alice fights to save her sanity and Wonderland from a shadow of corruption. In Alice: Madness Returns, Alice wears a variety of dresses. One of these is the royal suit, based on the Queen of Hearts and is cosplayed here by Atlas Cosplay. The costume is flawlessly executed. With a gray heart skull on the bow on her back and gold hearts down the front of her dress, Atlas Cosplay could pass for the Queen of Hearts daughter. Donning black and white striped stockings and gloves reminiscent of castle towers in Queensland, she knocks the little details back to reality. Wielding her Vorpal Blade, Alice’s decorated kitchen knife, she is beautifully dangerous.