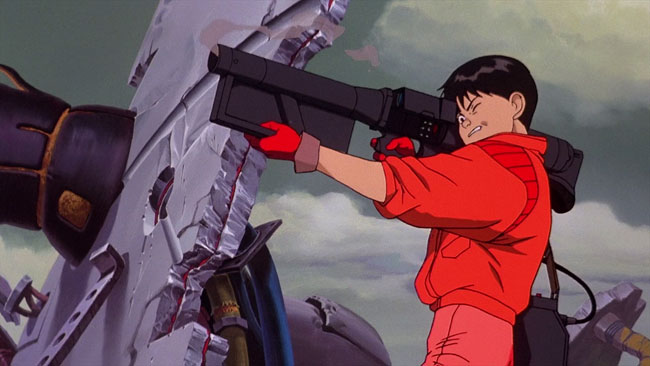 The Most Awesome Movie Weapons of All Time

I can’t count the times I’ve been stuck in a muddy off world foxhole, wishing for a bigger boomstick. Just last week, the unspeakable horrors of the Horsehead Nebula tore my squad into ribbons; as Sergeant Reyes got disemboweled with his own femur, I thought, “if only we had the sweet guns from those old movies we watch in the galley.” Nope. Just dinky little rifles. Against the alien menace. Poor Reyes. He had a kid, you know. Or was it a dog?

Here are some of the weapons the hardworking, hard drinking, hard fighting men and women of the Intergalactic Marine Expeditionary Force (IMEF) covet the most. The Arasaka is a personification of Neo-Tokyo itself. It’s sleek and aesthetically pleasing, but under the surface it’s an impossibly destructive dynamo waiting to be unleashed. Not many carbine-sized weapons can crater the side of a skyscraper in one shot. Not to mention, it’s got some pretty sweet-looking explosions, even for a particle acceleration cannon. And look, before you say the Arasaka wasn’t powerful enough to defeat Cronenberg Tetsuo, shut up. Besides the fact that only the ghost of a Japanese child could defeat Tetsuo, it’s a made up threat. Who ever heard of a teenager with non-ninja, non-turtle mutant powers? Now, xenos on Centauri Prime, that’s a real threat. A threat we can blow up with particle acceleration cannons. I’m a bit biased about this one. It’s not technically a pure “weapon,” so to speak, so much as an industrial tool. But god damn, the Caterpillar is one sweet industrial tool. It’s got a utilitarian feel about it: simple to put together, but durable enough to take a pounding from a Queen xeno – everything you could ask for. A lifting capacity of three tons has versatility written all over it. You want to carry the rations from the drop ship to the front lines in one trip? No problem. Want to rip your adversary limb from limb with a flick of the proverbial wrist? Knock yourself out. As if the hand-to-hand goodness weren’t enough, there’s modular support for all manner of deadly accessories, from laser torches to outright flamethrowers. Ah, the flamethrower. The poor man’s way of saying “Get away from me, you bitch.” Really? You’re going to make me justify having a chainsaw for a hand? The feeling of using the appendage you once masturbated with to cleave a man in two isn’t enough for you? Well, for starters, it’s a chainsaw for a hand. Doesn’t really get more badass than that. Let’s see, what else… Ah! It did kick start the whole “let’s replace out limbs with weapons” fad in Hollywood. Besides, you know, the whole pirate hook hand thing. Still, you can’t have Planet Terror without Ash Williams. I guess. Also… uh… you know what? Screw this. It’s a chainsaw hand. You civvies and your “reasons.” No, I didn’t pick the lightsaber. Yeah, don’t get me wrong, lightsabers are cool and all, but they’re pretty much useless unless you have a high midichlorian (ugh) count. Good luck deflecting lasers without the teachings of Master Yoda. Then, you’re stuck with nothing more than a glow-in-the-dark samurai sword. But honestly, the ability to bend time and space to your will beats out a green katana any day of the week. When a horde of bad guys comes running at you, you can simply force push them off a cliff. If culinary kills are more your style, just shoot a lightning bolt out of your fingertips and BAM! Xeno jumbalaya all around. And if someone cuts you off in the chow line, just force choke them into submission. You know, not enough to kill them, just enough to have them breathing through a straw for a few weeks. Yeah… that’ll show those Bravo squad chumps.

Hey, do you guys ever feel like it would be cool to be a sith?