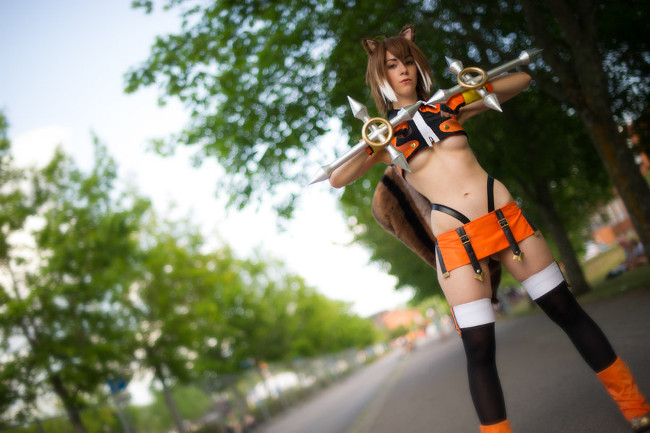 In the world of BlazBlue: Continuum Shift II, there are characters classified as Beastkins. A beastkin is a person that has animal-like qualities. One of these characters is the playable Makoto Nanaya, a squirrel type beastkin. She is a friendly and outgoing girl, making her a loveable character. Often appearing scatterbrained, she is actually quite cunning, using her skills to be an Intelligence agent. While she once hated humans due to her abuse at the Military Academy, she has changed her outlook on life and is very loving towards her friends. With bestial reflexes and surprising strength, she is a strong ally to have.

Shiroiaisu has taken on the whimsical, tonfas wielding stunner in a fantastic cosplay. With a fluffy squirrel tail and cute squirrel ears, you would never expect her to have copious amounts of strength. In her short skirt and under breast baring top, Shiroiaisu is radiant. Her boots are orange and match the rest of her outfit. The craftsmanship on the tonfas is stunning, looking like straight out of the game’s art.