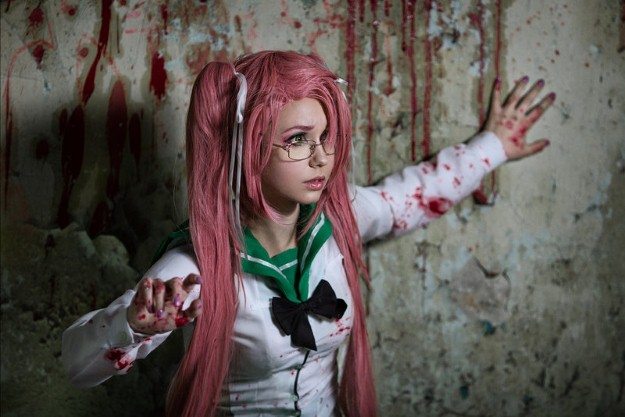 The Smartest Zombie Slayer Around: A Saya Takagi Cosplay!

All was normal at Fujimi Academy on the day of the zombie apocalypse. Students were asleep at their desks, counting down the clocks, while others, like Saya Takagi, were carefully paying attention to each word spoken by their teacher. However, such an ordinary day would turn into a catastrophic one as the outbreak happens. Witnessing the gruesome deaths of her fellow classmates as they are getting devoured by those they once called friends, Saya barely manages to escape with her life, but her intelligence allowed her to outwit those mindless zombies. Even during the chaos of an apocalypse, Saya is on the ball, collecting supplies to fight off the zombie hordes and plotting affirmative action to help save what friends she has remaining. She is quick to learn about zombies, realizing their strengths and weaknesses, and being the first to notice that they only respond to sounds. It is without a doubt that Saya Takagi is one of the smartest students to ever grace the halls of Fujimi Academy, and a valuable asset to her group of surviving friends. Without her, they would all surely be rotting. The pink-haired Saya Takagi has long been cosplayed by High School of the Dead fans. Still rocking her Fujimi Academy uniform and girlish pigtails, she is both cute and brave as she is covered in the blood of the dead. Cosplayer Alexia Muller re-creates Saya perfectly, with her signature glasses, adding a bit intellect, and an adorable frightened look.  There is surely to never be a better cosplay of High School of the Dead’s Saya Takagi than this one!