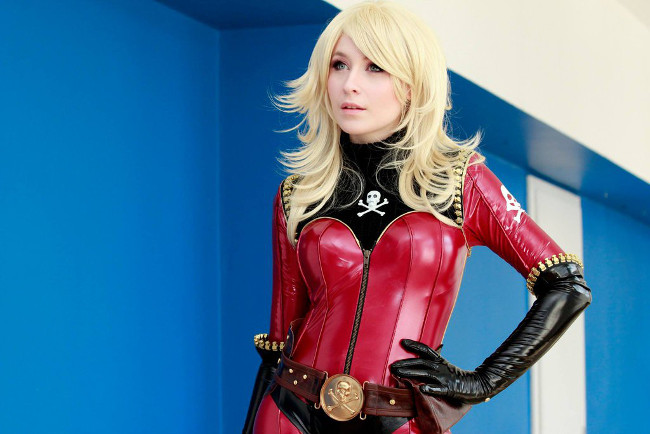 Kei Yuki is one of the main characters in the series Space Pirate Captain Harlock. Having been orphaned after the execution of her parents, she was arrested for assaulting a military member and being transported to Earth. She was rescued by Harlock at the age of 16 when he raided the ship she was being held on. She is one of the youngest members of the crew and an executive officer also charged with watching over the youngest crew member, Tadeshi Daiba, an orphan like herself. Nikita Cosplay slips in Kei Yuki’s black and red bodysuit to become the blonde haired pirate. The construction is seamless and well executed. The body suit is adorned with white skull and crossbones embellishments, as well as the boots. The edges of the boots and gloves have a large zipper-like pattern as well as the edging on her shoulders. The holster on her hip is gorgeous and clasped with a gold skull and crossbones medallion. Nikita Cosplay has hit the bulls eye with this costume, becoming the young Kei Yuki.