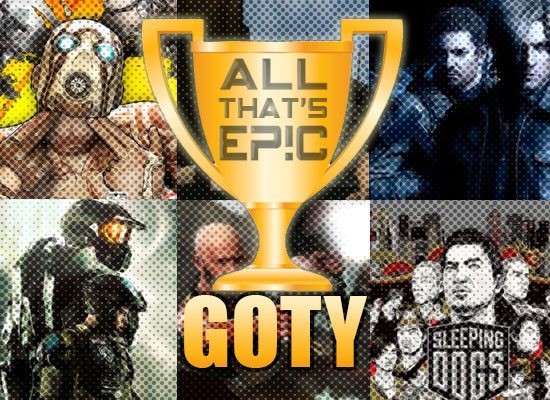 The Winner of Conslayer’s 2012 Game of the Year: Borderlands 2!

As we draw to the end of the year, there is no denying that 2012 was such an epic year to be a gamer. We stepped in the shoes of some incredibly great characters, and lived out so many great adventures this year. Whether you were a stealthy assassin, a dangerous Spartan, or a Vault Hunter with a best friend named Clap-Trap, there’s no doubt that many games this year could be considered for Game of the Year. But one stand out title completely demolished the competition, proving that if you give your all to your fans, and do everything and more to make a perfect game, you can succeed. Ladies and Gentlemen, fellow Gamers, I present to you, the winner of All That’s Epic’s 2012 Game of the Year: Borderlands 2!

Borderlands 2 totally redefined what we consider as replayability and value in a video game. You could sink over 40 hours of your life into your adventure of hunting down and killing the man that is Handsome Jack, while collecting rare loot and helping out the amazing cast of characters along the way. You could do it alone, you could do it with three other friends, but no matter how you do it, it’s an absolute blast and highly addictive. And in the end, once you’ve saved the day, had a ton of great laughs, and collected a shitload of rare and zany weapons, you will do it all over again to keep the good times rollin’.

Borderland 2 is the Swiss army knife of gaming with 87 bazillion parts at your disposal. It would be the perfect game to have if you were trapped on a remote island, and many weeks later when help shows up, they’d find you obsessively playing and barely through your second playthrough. And instead of asking for water, you’d be bragging about all your orange rare weapons you’ve discovered. For all the epicness this game brings to the table, there is absolutely no denying that Borderlands 2 is Game of the Year.