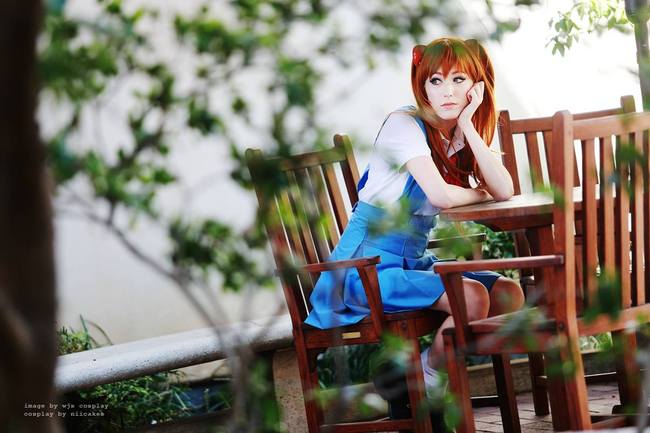 This Asuka Langley Soryu Cosplay Pilots its Way into Your Heart Asuka Soryu is a classic example of a girl who is a jack of all trades, and a master of all. Asuka is fluent in German and Japanese, she also earned a university degree as a teenager and many agree she is exceptionally gifted. Additionally, she had years of difficult training starting from a young age to pilot an Evangelion, which is a large robot used in a futuristic post-apocalyptic Tokyo to fight away large fiends called Angels.

As one of the main characters of Neon Genesis Evangelion, Asuka was introduced with an over abundance of self-confidence and spunk. Unfortunately, her pride was her ultimate flaw, being plunged into a depression after her first loss against a particularly difficult Angel. Eventually, she is replaced by a more able pilot in the Evangelion Unit-02, never regaining her generally sassy personality. Cosplayer Niicakes makes an amazing Asuka, dressing up in Asuka’s signature school uniform that includes a blue dress, white socks and a pair of black shoes. Asuka is a proud Evangelion pilot, always wearing her red A10 nerve clips (used to pilot her robot) in her hair to remind everyone around her that she is a pilot. A red bow around her collar pops and compliments her red hair, and equally fiery attitude. As Asuka frequently asks fellow pilot Shinji “Are you stupid!?”, and you would have to be to not love this awesome cosplay. Witness the Majesty of Leblanc in Stunning Cosplay