Comic Cosplay Wednesday: An Impressive Cosplay of Molli from BubbleGun! 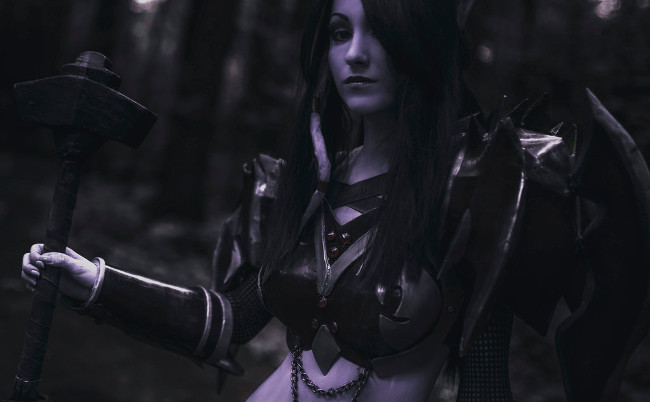 This Draenei Cosplay is Out of this World In the mystical land of MMORPGs, where exciting fantasy adventures can be played out with the click of a mouse, the World of Warcraft franchise reigns supreme. The epic game by Blizzard is undoubtedly a heavy-hitter, with a dedicated fanbase and millions of worldwide players that have gathered since its debut in 2004. One of the most satisfying aspects of WoW is the roleplaying aspect… living out the fantastical lives of one of Warcraft’s many races… whether you’re walking in the shoes of a dwarf, blood elf, or human. For some, though, the transformation in-game isn’t nearly enough. Cosplayer Feyische is one such fan who has gone the extra mile… becoming a beautiful and powerful Draenei warrior in the flesh. Her blue-tinted skin is smooth and flawless, looking completely natural. Her weapons and armor are wonderfully constructed, and the detail is breathtaking, displaying a stunning balance of feminine appeal and kickass warrior. The ears and her hooves really seal the deal, making her indistinguishable from the game’s designs.

She’s one Draenei that we wouldn’t mind fighting on our side for the Alliance. Injustice’s Hawkgirl is Given More Than Justice With This Epic Cosplay!