This I-No Cosplay Will Rock Your World 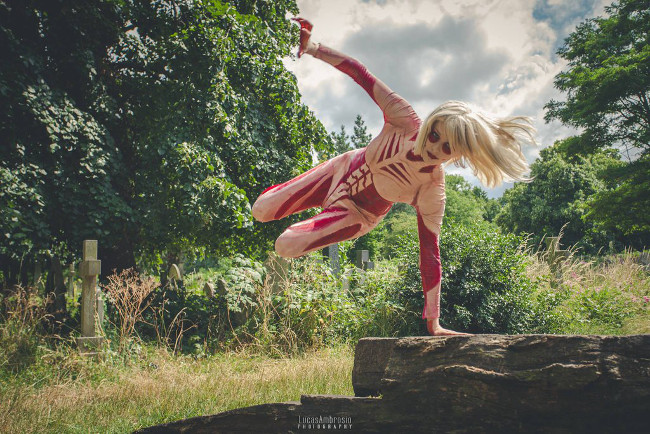 This Female Titan Cosplay is Coming For You

There’s no doubt that Attack on Titan has become quite the success, it’s popularity expanding to anime, multitudes of merchandise, and even a live action movie. Fans seem to fall immediately in love with Eren Jaeger’s story, either feeling a sense of kinship with him, his friends, or his struggles — not that any of us have been attacked by Titans but you could stretch to it fit an everyday situation. Whatever the reason may be, Attack on Titan, or Shingeki no Kyojin, has an extensive fanbase.

Titans, the main antagonists of the title, are what wreck havoc on the humans, gobbling them up as they come across them. This is what the Scout Regiment — which Eren, Mikasa and Armin are a part of, fight against when needed. While there are the “every day” Titans one is used to seeing, the female titan was a bit more rare, as most all of the other titans were male. The female titan’s story later unfolds, and viewers are able to learn the origins of her story — but there’s something beautiful about her, even if she is a titan. Her fighting skill is undeniable and she’s able to maneuver her way in and out of tricky situations. She’s cognitive as well, obviously quite smart — making decisions that tend to trip up those around her.

Cosplayers have taken the opportunity to become the female titan, and some have done a good job in doing so. Others, however, have done an amazing job and Hollita is one of the more successful takes on the female titan. Each muscle is executed with mastery, and the details are practically flawless. Photography by Fruit Salad Me

Powered Up and Grown Up Powerpuff Girls Cosplay