A Fierce Rayquaza Cosplay to Make Your Pokedex More Epic 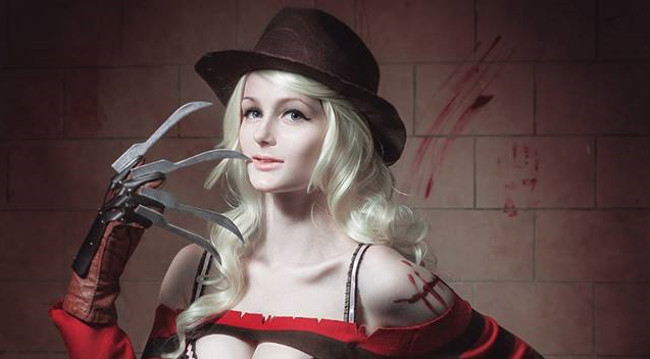 This Freddy Krueger Cosplay Will Leave You Breathless

He’s coming for you — well she is, and you might want to go ahead and run now. Hiding under the covers might help in usual circumstance, but Freddy Krueger is a little different. Most have heard of the killer who attacks his victims in their sleep. While you might be safe while you’re awake, how long can you actually keep your eyes open? That’s what Freddy banks on — when his victims can no longer stay awake and give into their sleep depravation. Unfortunately, most see their demise in a realm in which they once knew as safe.

With his burned face, Freddy is already more than intimidating. Add his gloves that have long knives attached to them and you know he’s not one you want to mess with, essentially avoiding him at all costs. While most would never think of Freddy Krueger as attractive — if not solely for the fact that he’s a cold blooded killer. However, cosplayers have been putting their own twists on characters for quite some time. Either by turning them into something you’ve never seen before, or genderbending them. In this case, Freddy has gone from man to woman. Where they were burn scars once before there is smooth skin, and there are other new parts to him — er, her, as well. Freddy Krueger has gone from a beat up looking villain to a sexy and alluring woman, which is quite the dangerous combination when it comes to a serial killer. One might not be so inclined to run away from such a beauty, but hey, that’s probably the point. Tniwe cosplay has done an amazing job turning Freddy Krueger into something all her own and there’s no doubt that this is one of the better plays on Freddy that we’ve ever seen.