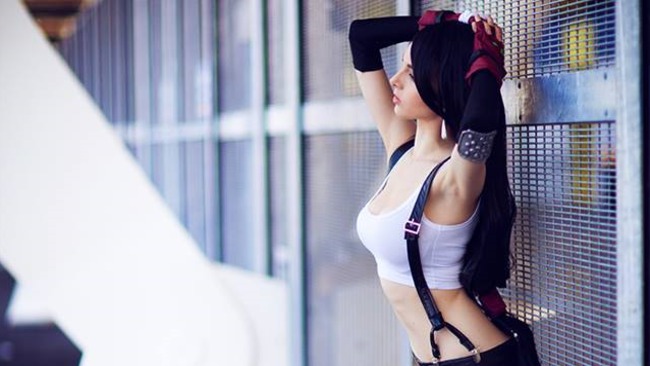 This Tifa Lockhart Cosplay is a Sure Knockout Final Fantasy is easily one of the most popular gaming franchises, revolutionizing the industry and widening the video game fan-base worldwide. Fans of the series are some of the most devout in the community. With over 14 games and a wide array of very unique and interesting characters, everybody has a different favorite. Many a fan love Tifa Lockhart, the badass unarmed brawler from Final Fantasy VII. Tifa is best known as Cloud’s childhood friend who persuades him to join the resistance group, AVALANCHE. She joins him on his journey to take down Sephiroth and along the way made a home in the hearts of Final Fantasy fans. Cosplayer Fasffy encapsulates Tifa in every way. From the hair, to the gloves and entire outfit, all the way down to the boots this cosplay is as perfect as it could get. The costume was made by P.H. Loves Craft, a very talented costume commissioner. You don’t want to get in Fasffy’s way, because she is one hell of a knockout in this Tifa cosplay.

Photography by Lorenzo So

Written by Guest Contributor: ShaunaOH
[signoff2]
Hey cosplayers! Want a feature of your own? Submit your photos to our Tumblr page or attach them in an email to [email protected] for a chance to appear on our site!