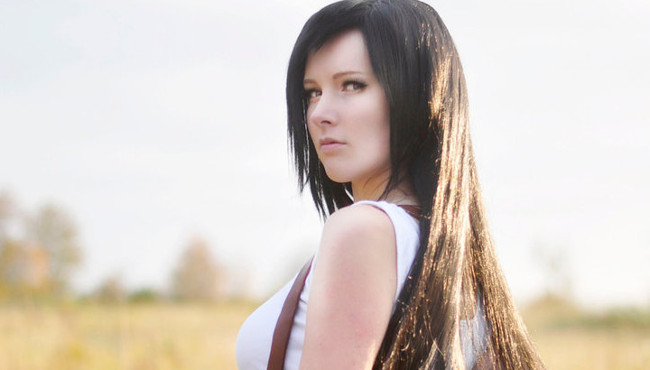 This Tifa Lockhart Cosplay is an AVALANCHE of Beauty! There are few people who haven’t heard of Final Fantasy — Square Enix’s on-going franchise essentially becoming a household name amongst gamers. Some have even grown up with the series, as it came into being in 1987. Whether you’re an avid fan or not, there’s no denying that Final Fantasy titles have impacted gaming or gamers themselves — inciting a plethora of warm and fuzzy memories, often backed by hours upon hours of game playing. While Final Fantasy has offered a mass amount of characters for gamers to grow attached to, some even making waves in the Kingdom Hearts series, there are some that stand out above the rest such as Tifa Lockhart. Tifa appears as a playable character within Final Fantasy VII and continually popped up in other Final Fantasy titles as well. She’s known for being one of Cloud Strife’s childhood friends, being a member of AVALANCHE, and later convincing Cloud to go after Sephiroth. Also known for her ravishing good looks — donning long black hair to her waist and multiple outfits that hug in all the right places, Tifa Lockhart is quite the stunner. Final Fantasy and Tifa may have had quite the impact on the gaming world, but the character and franchise has also gained popularity in the cosplaying community. Taking on Tifa isn’t uncommon from cosplayers, but not many can do it as flawlessly as the beautiful Yumidun. With long black locks, a white tube top, suspenders and mini skirt Yumidun brings Tifa right to life — giving the illusion that she’s more human than pixel. Not many can accomplish such a feat, and Yumidun gets a big round of applause and praise for doing so.