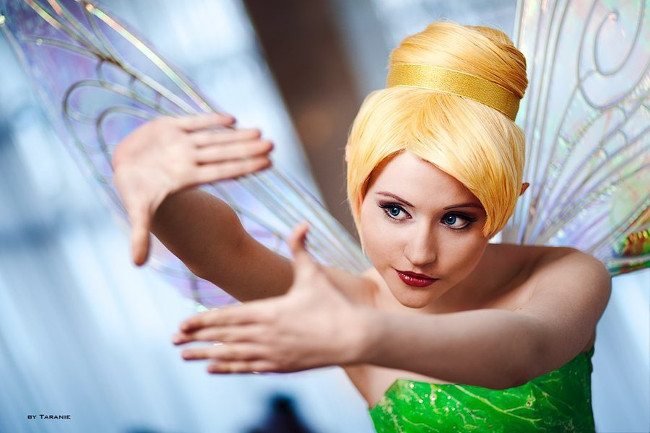 We wished upon a star and found a Tinkerbell cosplay that’s both pretty and sassy!

Tiny, cute, blonde… all these words and more come to mind when anyone brings up the world’s favorite fairy. Although she may be sweet and soft on the outside, this pretty pixie is more than meets the eye. With a personality that is far bigger than she is, Tinkerbell is not afraid to fight for what she wants – including a certain ginger-headed boy.

Tinkerbell is known around the globe as one of Disney’s most treasured icons. She seen in commercials, parades, Disney theme parks, and of course at the beginning of every Disney movie. She sprinkles pixie dust all about Cinderella’s Castle to represent “the magic of Disney”. Tink has quite an extensive fan base.  She can be seen on t-shirts, cars, jackets and more, because the world simply cannot enough of the beautiful yet sassy Tink, and who can blame them? New animated movies came out in 2008, and every year after, featuring Tinkerbell and her group of fairy friends going through adventures and discovering how important everyone’s different talents truly are. Tinkerbell is a Tinker Fairy in the land of Pixie Hollow, meaning her special talent is to fix and build things for the other fairies. These movies are the reason that Tink finally found her voice, giving her a softer side, and made her even more popular among adults and children alike. Rocking out the iconic little green dress here is cosplayer Tink-Ichigo. She does an impeccable job of bringing Tinkerbell to life. Filling those puffball-embellished shoes cannot be an easy task. Since Tinkerbell is such a widely recognized character, accuracy is even more important. Tink-Ichigo gets everything correct, from the top of her bun to the tip of her tiny toes.